The “Nameless Thing” of House No. 50 has been the subject of mysterious tales for more than 200 years.

Berkeley Square lies at the center of London and for over two centuries it has been one of the marquee areas to live in the whole of the city. Along with Park Lane and perhaps Chelsea, Mayfair epitomizes the wealth and success that London has to offer. It is the kind of neighborhood in which lords, ladies, earls, and duchesses can rub shoulders with one another. Nightingales are said to sing freely there, according to a very old song. House No. 50 within Berkeley Square has an additional claim to fame: The Nameless Thing. 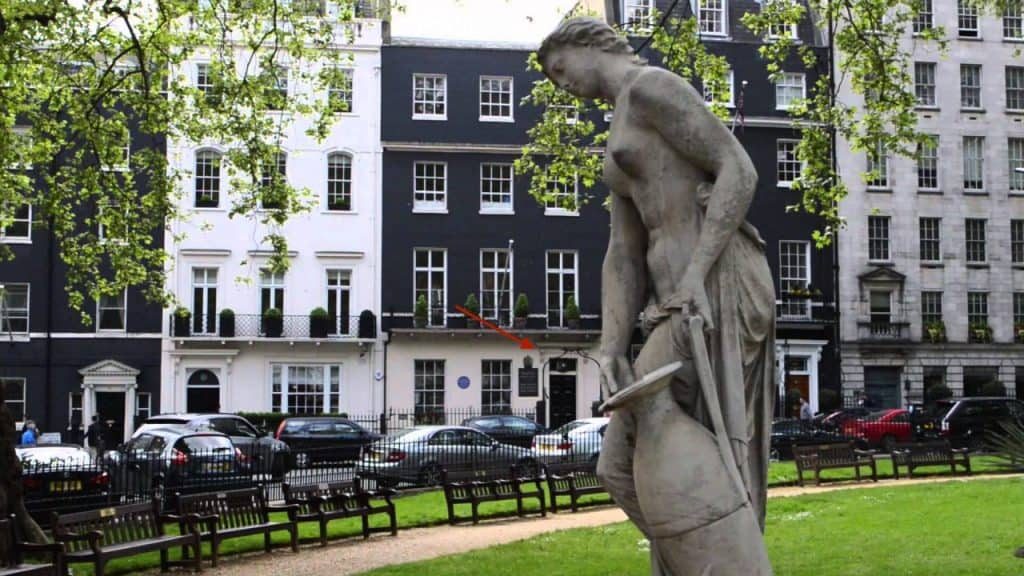 House No. 50 of Berkeley Square is a popular destination for ghost tours in London. Source: Youtube.

This story begins in 1740 when an architect named William Kent built the four-story property. Several prominent people throughout history have called this house their home. Among the more famed of these tenants was George Canning – a plaque commemorates this – and Winston Churchill. But yet another occupant has the potential to outdo even these two notable politicians.

It was 1840 when news of eerie happenings reached a 20-year-old student, Robert Warboys. When he was socializing with friends in a tavern in Holborn, he waved off all the stories as fiction. At least some of his drinking companions agreed to disagree and offered a challenge to the headstrong young man: spend a night alone in the second-floor bedroom of House No. 50. Warboys was quick to accept the challenge. With his Dutch courage coursing through his veins, Warboys headed directly to Berkeley Square and persuaded the landlord to allow him to use the room.

It took some finagling, but the landlord finally relented and gave his permission. However, this would only happen on the strict adherence to two conditions. The first condition was that Warboys needed to arm himself with a pistol. The second condition was that at the first sign of anything even remotely unusual, he would summon the landlord by way of a cord that linked the notorious room to a bell within the landlord’s own room. Warboys flippantly agreed to those stipulations.

Just after midnight, Warboys was alone in the room. The landlord had gone to bed in his own room directly below and had gotten less than 45 minutes of sleep when the bell began to ring furiously. No sooner had the bell broken the silence when a gunshot did the same. The landlord sprinted up the stairs and quickly unlocked the door. Much of the room was as it should have been. The only difference was that Warboys had backed himself into a corner and wore an expression of sheer terror. He still had the pistol in his hand, which was smoking. The one shot that was fired left a bullet embedded in the wall. Nothing else unusual was visible.

Almost five decades on from whatever happened to Warboys, a pair of sailors from the HMS Penelope which was docked at Portsmouth were spending their free time in London. Robert Martin and Edward Blunden were both drunk when they broke into the now empty House No. 50. The basement was too damp for them to lie down and rest, so they went upstairs. When the pair stumbled onto the second-floor room, Blunden felt more uneased than his drinking partner.

He admitted to feeling the presence of ‘something.’ Martins just shrugged it off and proceeded to open a window to let in some fresh air. Both men were soon asleep, but Blunden awoke about an hour later at midnight. A creaking noise, made by the door, drew the sleepy man’s attention. After adjusting his vision, Blunden noticed something else. The door to the room was wide open, and something was crawling on the floor. Whatever this thing was, it was gray and blocking their only viable escape route. Martin had also woken up by this time. Blunden took his eyes off of this thing when he noticed there was a rifle near the window. He made the fatal mistake of trying to get to it. Quick as a flash, the thing attacked Blunden. 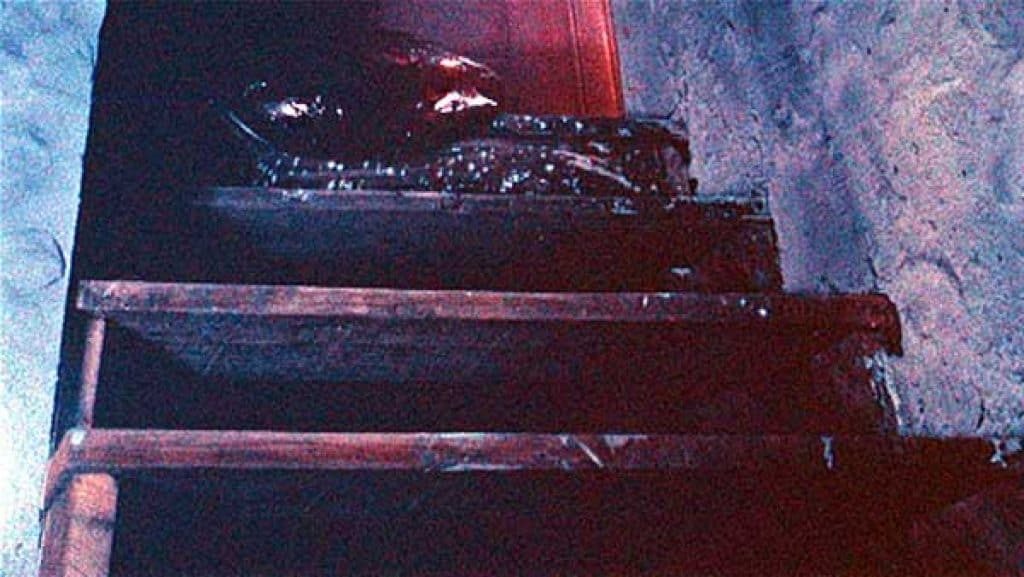 The Nameless Thing crawled on the floor and blocked the sailor’s escape. Source: criterion.com

Martin took the chance to flee. Racing downstairs and out of the house, he managed to find a passing police officer and dragged him to the house. When both men returned to the room, it was empty. Blunden was discovered dead, but conflicting reports claim that he was either found dismembered in the basement or jumped or fell from the open window. The expression on his face was said to have been similar to the one on Warboys.

Both accounts could be attributed to an excess of alcohol, but there is one report on file that should be taken as gospel. This was to come from Thomas Lyttleton MP. When he was living in the same house and using the same room, he reported seeing something that he could not identify or explain. When he was preparing for a good night’s sleep, he saw a creature inside the room. Without panicking, he aimed a rifle at it and fired one shot. Lyttleton was convinced that he hit the thing, as he reckoned that it fell. However, no trace of it could be found. This sighting was said to have been corroborated by additional witnesses.

Whatever it was, it was out of shape and looked like a ‘sticky liquid.’ It made odd noises when appearing to move and was best described as an octopus. Based on this account, researchers believed that the creature had finally been identified. This was an octopus that had somehow mutated or adapted to life outside of the sea and entered the London underground canal via the Thames. It used the existing plumbing to find its way into No. 50 and somehow lived unseen on the fourth floor of the building. 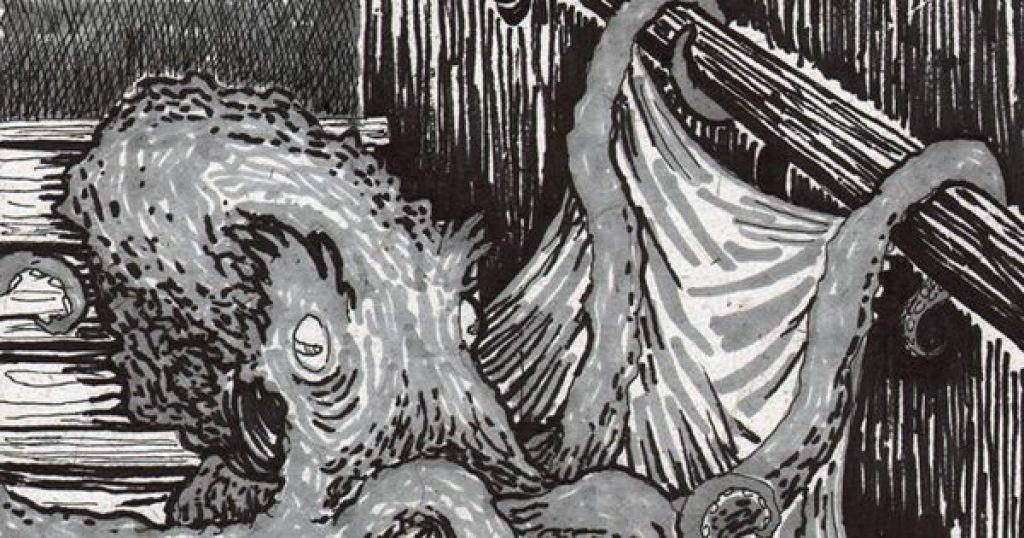 Could the Nameless Thing have been an octopus that lived in House No. 50? Source: Pinterest

Stories about House No. 50 such as these are merely the tip of the iceberg. Many other people have reported seeing or feeling something that cannot be explained. This has led to a lot of speculation as to what exactly people were experiencing. Among the stories is simply that the house is, or was, haunted by the spirit of a young woman that committed suicide after suffering abuse from her uncle. Other supposed ghosts include a small child that was killed by a servant and a man that locked himself inside the room until he went insane. One of the UK’s most eminent paranormal investigators was Harry Price. He once proposed the theory that early reports of the odd events were an invention of smugglers or counterfeiters designed to keep prying eyes away. This was an idea that has been used in 90% of Scooby-Doo cartoons.

During the 1930s, the Maggs Brothers bought House No. 50 and opened up an antique dealership. Since then, there have not been any reports of anything sinister going on within the house. Nobody is permitted to use the top floor of the property for any reason. Reports suggest that a notice has been posted to remind staff not to venture further upstairs.

The Nameless Thing of Berkeley Square is such an enduring tale partly because the people that spend time investigating or researching the activities of the house cannot even agree on what activity was happening inside one specific room. Some are convinced that there is a supernatural explanation, while others contend that it is an animal or creature that may or may not be known to science. Others are certain that this was some kind of mutant animal or person. Are any of those assessments accurate, or could it have been something else entirely?