Great Amherst Mystery is a gripping story with many witnesses.

One of the most frightening and highly publicized cases of preternatural activity was a haunting that people of Amherst, Nova Scotia, called The Great Amherst Mystery. A powerful unseen force purportedly tormented, injured, and traumatized Esther Cox and her family for a year starting in 1878. They were cast into a hell they could not escape from which included embarrassing scrutiny and mockery by skeptics. Intense paranormal activity was witnessed by neighbors, scientists, clergymen, doctors, and investigators, and the life of a young woman and her family would forever be changed after this shattering event. 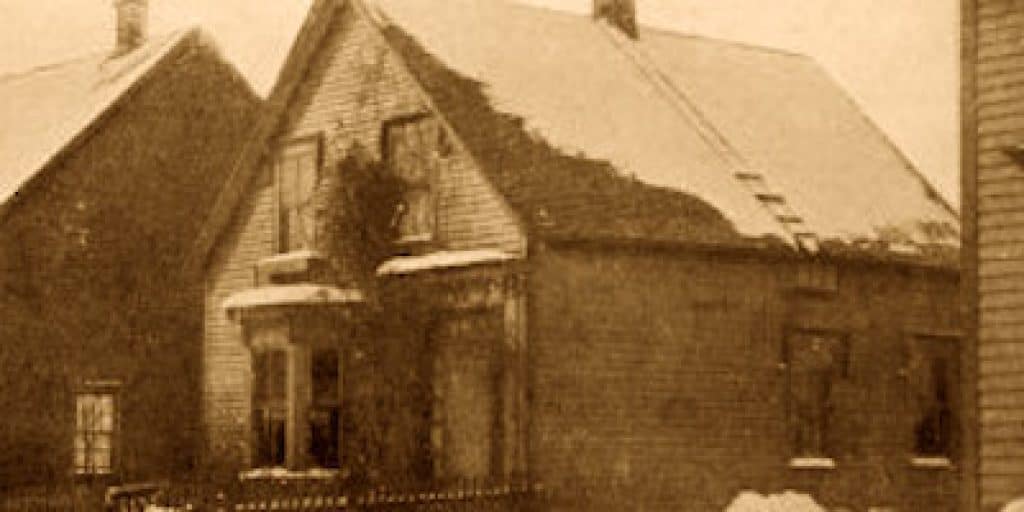 In contrast to the haunting of a physical location, these malicious hauntings followed an 18-year-old girl from place to place. Then one day they became so severe she had to leave her home for good. This case stands apart from other hauntings because of the credible witnesses. They actually observed many shocking events happen to and around Esther. This happened even while she was in full view and unable to cause the events directly herself. While some people believe this may have been a poltergeist, in which the intense disturbed emotions of a young female may cause strange inexplicable psychic manifestations, others think something more sinister and external was at work. 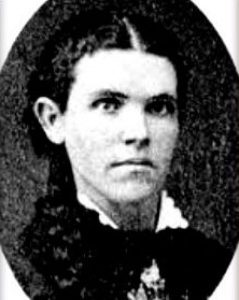 Esther Cox was the subject of a poltergeist haunting in 1878. Public.

Esther Cox and Her Demons

The Great Amherst Mystery began in August of 1878 and lasted into the last half of 1879. Esther Cox lived with a number of relatives in a cottage house in Amherst. Reportedly, the precipitating event took place when Esther was the subject of an attempted sexual assault with a gun by Bob McNeal. He was a family acquaintance that she had developed a fondness for, despite rumors that he was of poor character.

Esther was traumatized by the assault, and her behavior changed. Her sisters witnessed her crying herself to sleep, and she seemed depressed. But they just assumed the emotional girl merely had a falling out with Bob. Esther hadn’t told them of the assault.

Strange things began happening shortly after the event with Bob. Esther and her sister, Jane, shared a bedroom, and they began to hear strange rustling sounds under the bed. At first, the subtle noises led them to believe it was just a mouse. But events intensified quickly when on subsequent nights the noises would be accompanied by intensely frightening experiences that would prove this was no mouse.

During the first several nights, Esther’s body swelled up in agony causing her to feel she would explode. Her body changed from burning hot to frosty cold in a matter of seconds. She went into spasms and trances, and she said things that she later did not recall. The blankets and pillows flew off the bed repeatedly even after family members replaced them. Also, writing appeared on the wall above Esther’s bed saying, “Esther Cox, you are mine to kill.” There were strikingly loud sounds like claps of thunder that appeared to originate from under the bed, and later from the roof.

Initially, the witnesses were Esther and her sister Jane, their other sister Olive and her husband Dan, Dan’s brother, and Esther’s brother. There were also two young children belonging to Olive and Dan living in the house.

Esther’s Family Call in Their Doctor

Although they did not want to bring any attention to themselves for fear of mockery, the horrifying events led the family to call in a doctor to see if he could help. Dr. Carritte was amazed by the unfolding manifestations. He witnessed the writing on the wall, the loud claps, and also what appeared to be intelligent rappings in response to questions that were asked of the “ghosts.” Neighborhood residents became aware that something strange was going on at Esther’s home. The noises had become so loud that they could be heard from up to 200 yards from the house. Dr. Carritte described it as if someone was banging on the roof with a sledgehammer. The Great Amherst Mystery was becoming well-known around town.

Things moved in the house by themselves, flew through the air or manifested out of nothing. Household items disappeared from one location only to reappear in another, and later, fires erupted mysteriously. The hauntings would at times stop, only to start up again, but often they followed Esther wherever she went. She began to hear voices and see the entities that tormented her in various ways. They frightened her and also harmed her physically.

Life had become so intolerable for the family, with the frightful occurrences and fires that had been set in the house, that Esther had to leave her home. She was taken in by a kind family that allowed her to work in their dining saloon, but the hauntings followed her. Townsfolk witnessed many amazing things in the saloon. A knife that mysteriously flew through the air stabbed Esther. But after someone pulled it out of her, it flew back again into the same wound. 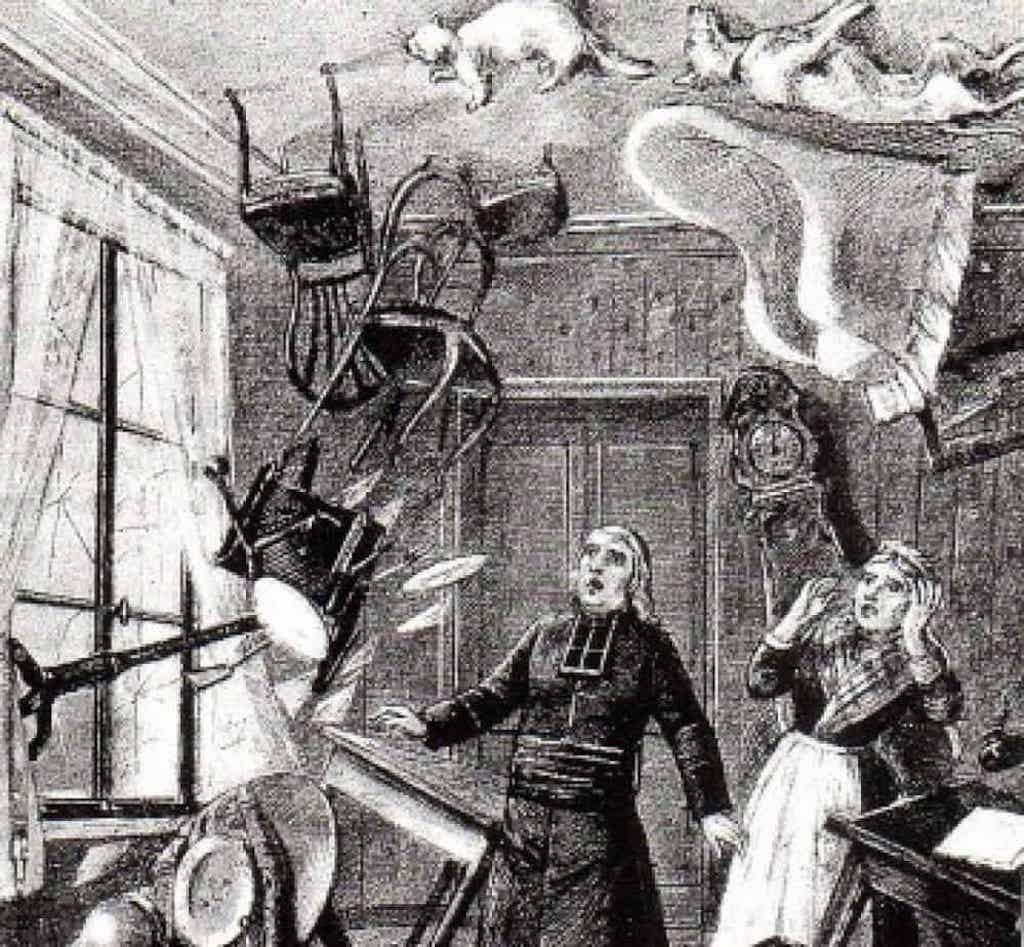 Even Esther Cox’s cat did not escape torment by the Amherst poltergeist. Source: unknown.

Scientific Investigation into the Haunting

Scientists, clergymen, and other doctors investigated the hauntings. A well-known reverend visited and witnessed a bucket of cold water on the kitchen table appear to boil. A Baptist clergyman, Dr. Edwin Clay, defended Esther after investigating and drawing the conclusion that she was not causing the manifestations herself. Dr. Clay spoke about the authenticity of the case at many lectures where crowds of people gathered to listen.

Townsfolk gathered at Esther’s cottage inside and out, trying to get a glimpse of the objects flying through the air, or to hear the thunderous booms, or communicate with the ghosts through questions and rappings. Esther even went to Saint John, New Brunswick, where she was investigated by a group of scientists who purportedly communicated with the ghosts and determined that it was a number of entities that were actually haunting her.

In June of 1879, investigator and author Walter Hubbell spent 6 weeks in the home of Esther Cox to document the Amherst haunting. He claims to have been the victim of his own paranormal events that took place at Esther’s house, and he witnessed many violent occurrences with Esther. Later, in 1879 he published his report called, The Haunted House: A True Ghost Story. He also published a book, The Great Amherst Mystery. Hubbell included affidavits of 13 witnesses who swore that they experienced the paranormal events firsthand. 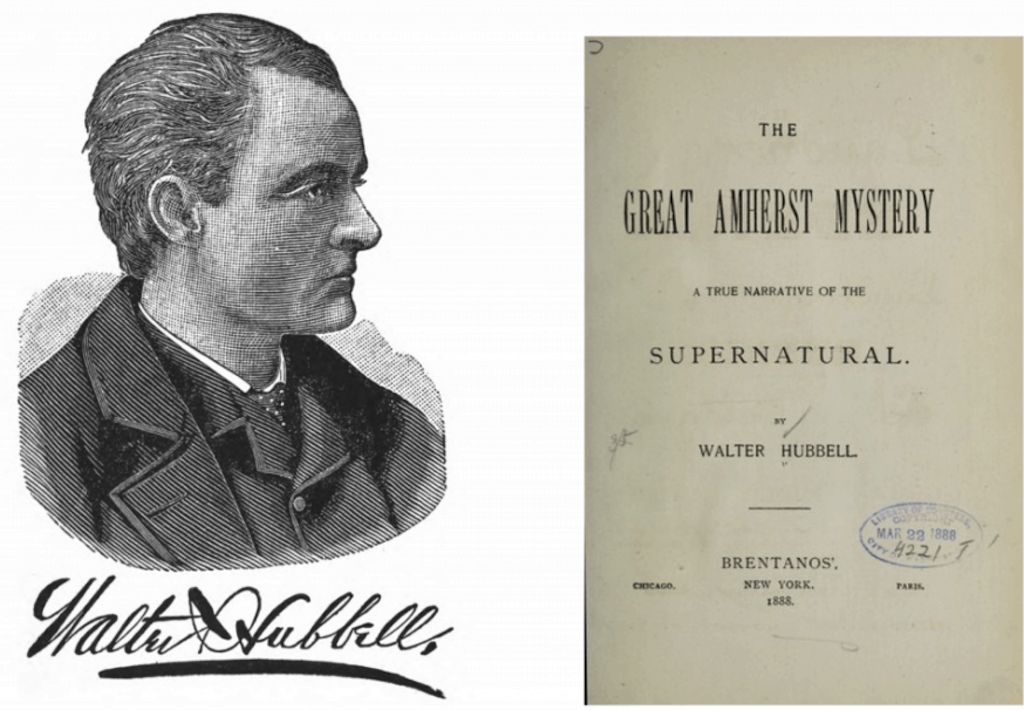 Walter Hubbell and his publication about the Amherst Mystery, 1888. Public domain.

Each time Esther returned home to the family cottage the manifestations intensified. While she was working for Arthur Davison, his barn burnt down, and he accused Ester of arson, for which she spent a month in prison. After this, the paranormal events slowly subsided.

Esther would go on to live her life and she would marry twice.  She had two children, and eventually, she moved to Brockton, Massachusetts with her second husband. And although Esther would carry on, The Great Amherst Mystery would forever be burned into the lives and memory of a town that would be known for one of the most highly publicized paranormal events of all time.