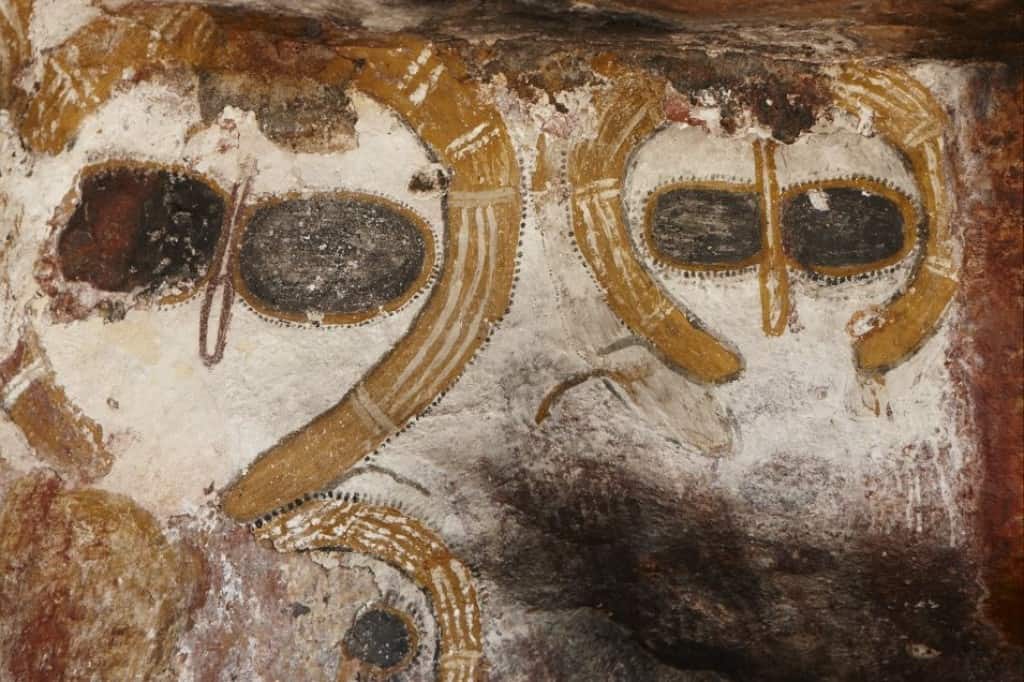 UFOs and ancient aliens in art is not only fodder for popular modern television. These supposed alien appearances in pieces dating hundreds to  thousands of years form the cornerstone of “ancient alien evidence.” Chances are that if you believe in ancient alien visits, this list of art is part of what persuaded you to believe Earth has been visited by extraterrestrials. According to fans of the theory, these pieces of artwork come from all over the globe, which shows that these encounters were not isolated.

Ancient Alien and UFO Works of Art in Europe

Saint Wolfgang and the Devil by Michael Pacher (1475-Austria) 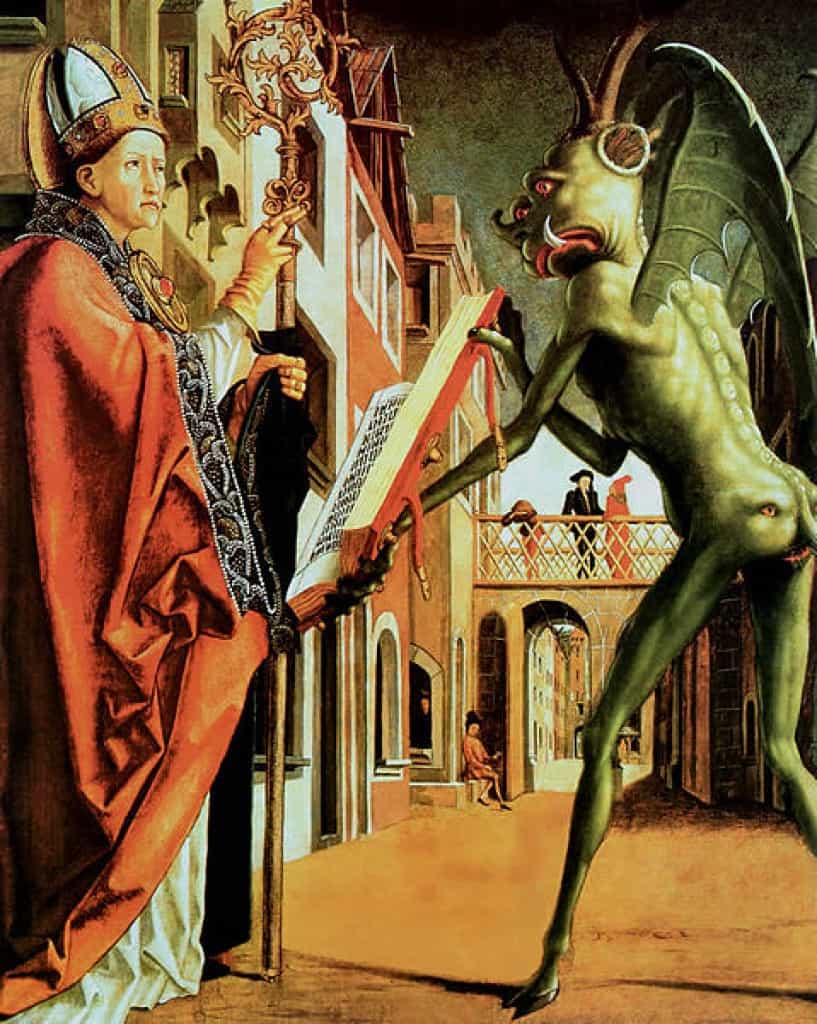 Saint Wolfgang and the Devil by Michael Pacher. Is this art a depiction of an ancient alien?

This awesomely strange work of art could arguably just be one man’s twisted view of the devil. However, some say the devil in this painting is really an alien. How else could you explain the face that is literally on the devil’s backside? Is there a nose or is just a cropped tail? It is hard to say, but that is definitely a horizontal smile, so what gives? Well, it looks like Saint Wolfgang just may have had a tête-à-tête with an alien.

The Annunciation with Saint Emidius by Carlo Crivelli (1486-Italy) 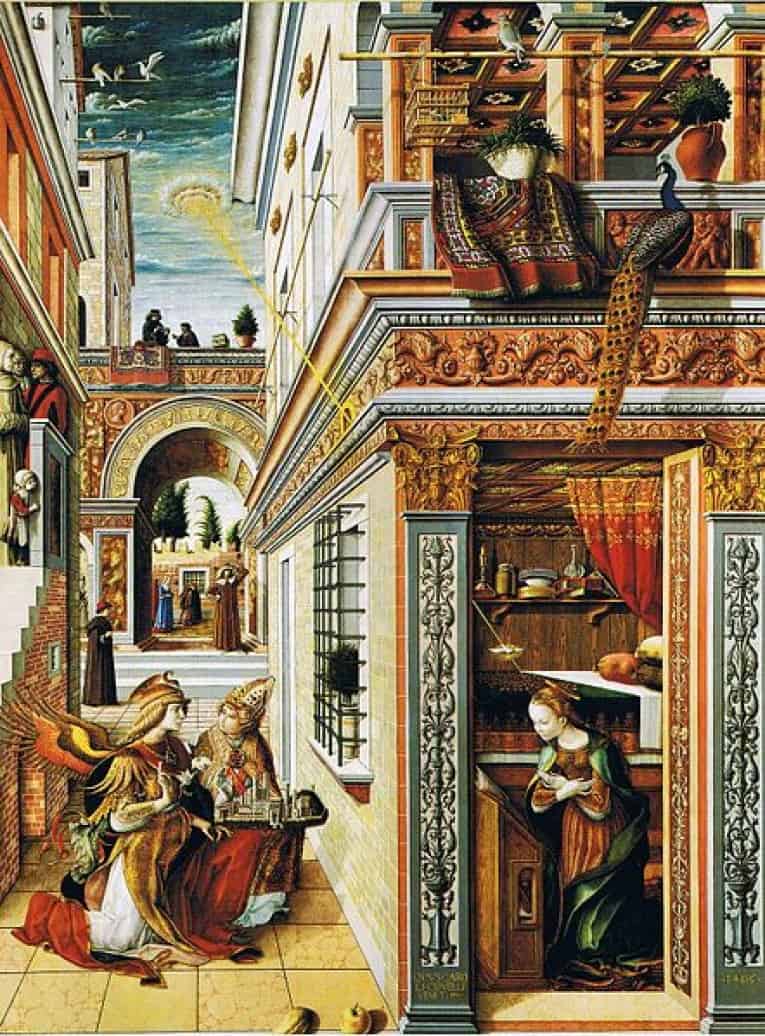 The Annunciation with Saint Emidius by Carlo Crivelli.

Now, this painting is a little sketchy for those who claim it features a UFO. It sure looks like there is a UFO in the sky shooting down a laser beam at first glance. However, this painting is of the Annunciation. There is a dove clearly painted near Mary’s head. That dove and that stream of light are the Holy Spirit descending from Heaven to represent the story the Archangel Gabriel is telling Mary. The disc in the sky is the sky opening up for the passage of light and bird. 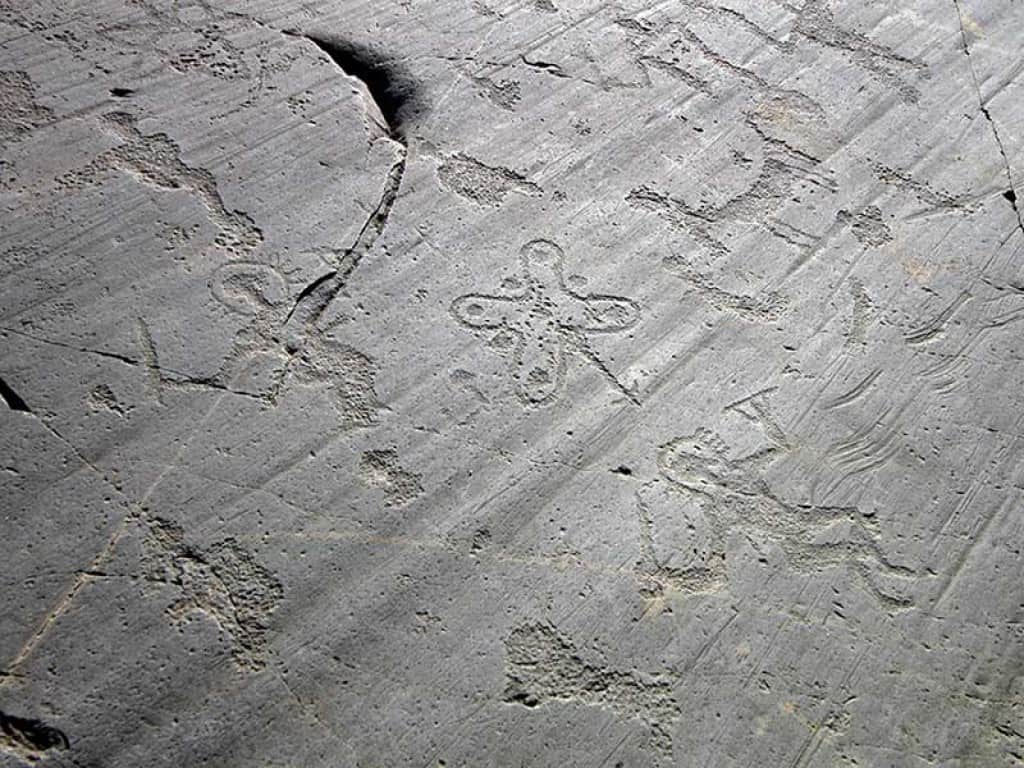 There is one drawing of many in Valcamonica that show human or humanoid figures with what look like halos around their entire heads. There are lines that may represent light coming out from these circles. They also rather resemble men in spacesuits or old-school SCUBA gear. Either would be rather strange. Proponents of the ancient alien theories say these are early depictions of alien visits.

The Wondjina rock art. Ancient aliens in art? You decide.

The Wondjina rock art in Australia is the best example of ancient aliens in art on the continent. To be fair, there are certainly some big-eyed, oddly shaped humanoids in these works of art. These were important paintings to Aboriginals, who freshened the paint so often that some areas have dozens of layers of paint. The question is whether these paintings depict aliens. Well, if you think the Aboriginal weather spirits were aliens, then yes.

Ancient Aliens and UFO Works of Art in Africa/Middle East 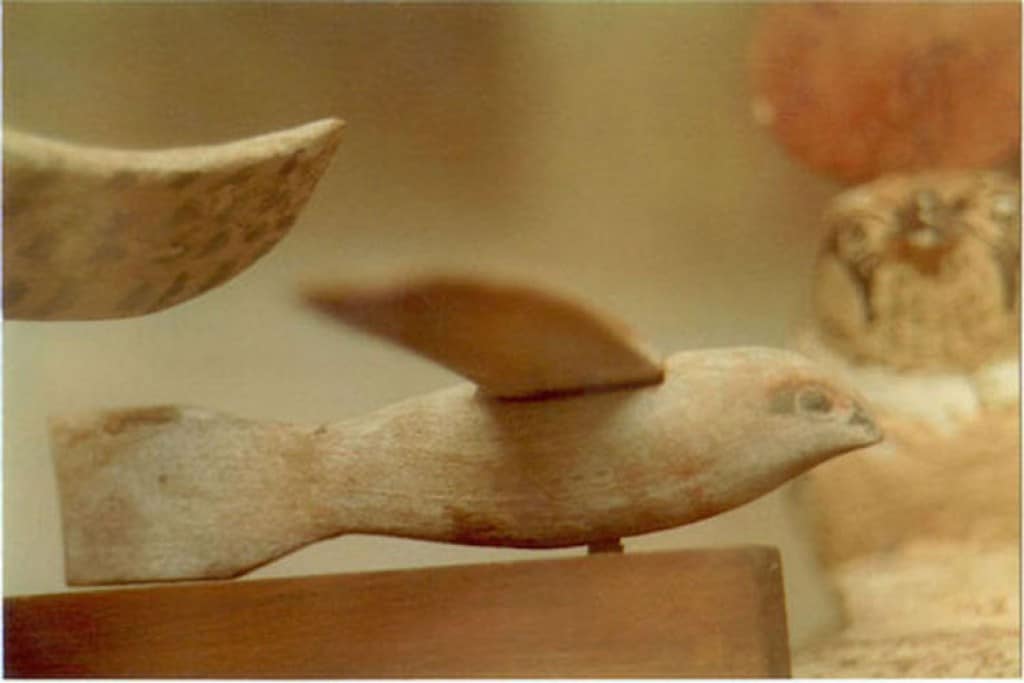 The so-called Saqqara Bird is a sycamore carving of a bird of no known species. It could be a toy, a ceremonial object or even a weather vane, according to theories. Now, the ancient alien theory surrounding this bird is two-fold. Firstly, some believe the carving is representative of ancient aviation technology. Take that one step further and aliens are the ones who offered that technology to humans. 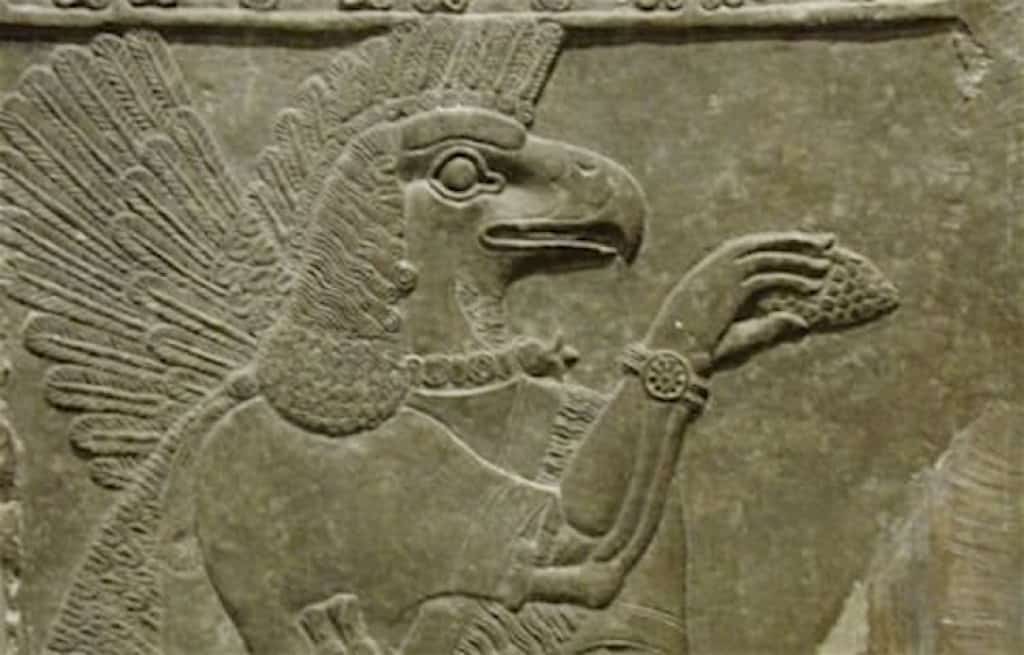 Where the Annunaki reptilian aliens?

We know that Egypt is a hotbed for ancient alien speculation. Did Aliens give them the technology for the pyramids? Did they build the Sphinx? The ancient civilizations of the Middle East give us equal questions. The Annunaki were gods mentioned in several ancient texts, including the Epic of Gilgamesh. They are also portrayed in ancient art. Some believe these beings were actually aliens who visited the people who invented writing, perhaps triggering the technological growth of humans.

Ancient Aliens and UFO Works of Art in Asia 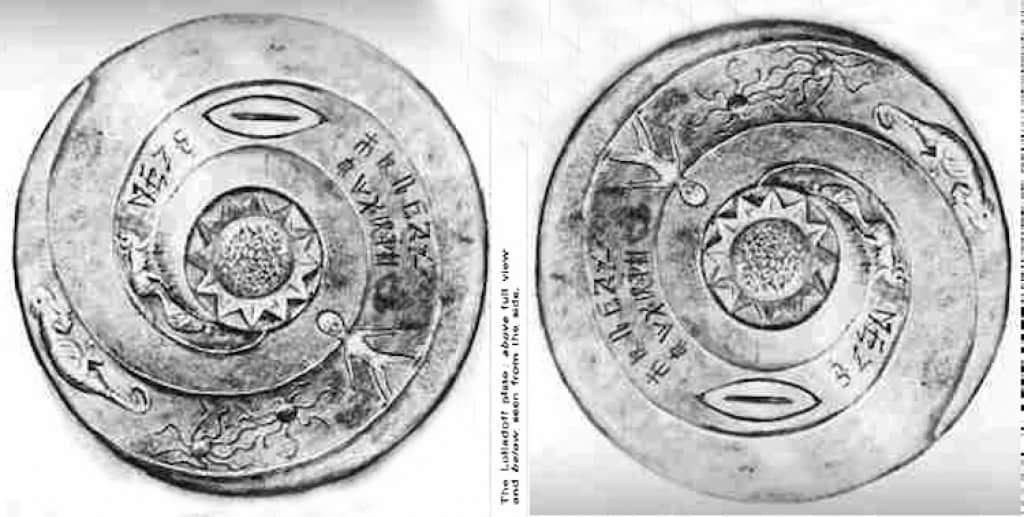 The Lolladoff Plate has a pretty accurate depiction of a grey alien, what may be a flying saucer and what is most certainly The Flying Spaghetti Monster and a chameleon. There are a few problems with the Lolladoff Plate, however. Firstly, only pictures of it exist. Mentions of the disc refer to a man who discovered the plate and may not even exist himself. In this case, it is up to the individual to decide if they want to believe this artifact truly exists and has a grey on it.

Ancient Aliens and UFO Art in the Americas 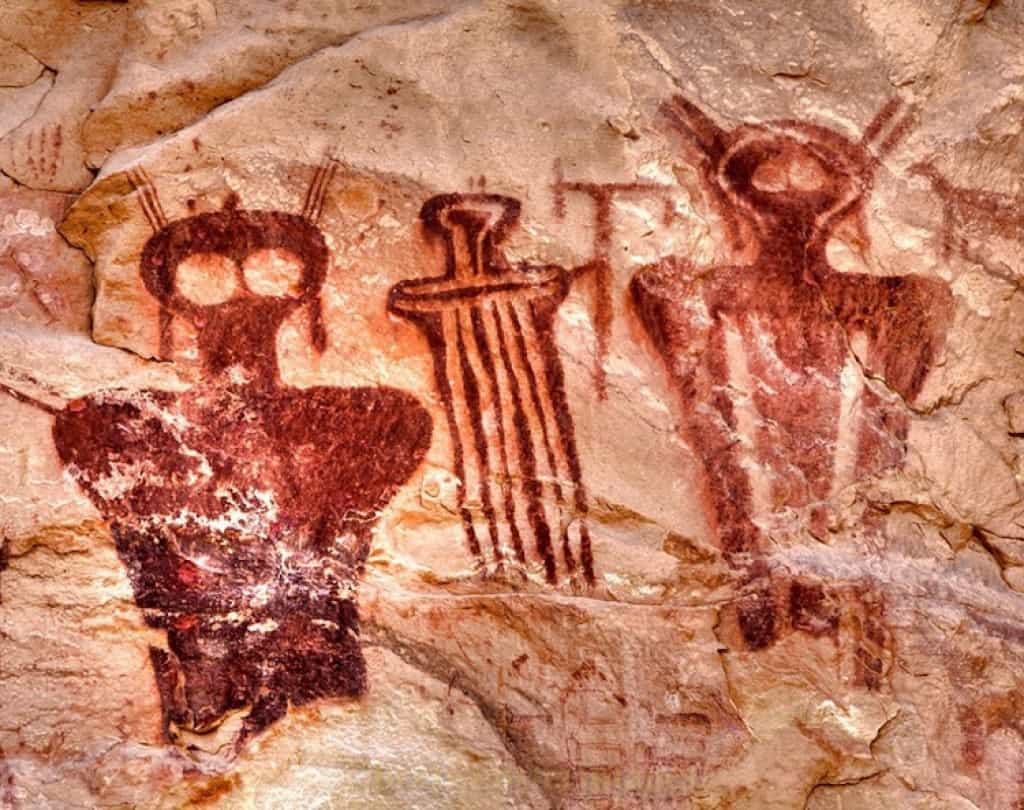 Is Sego Canyon drawings a depiction of ancient aliens in art?

The Sego Canyon petroglyphs are interesting in that they have art from at least three native cultures spanning nearly 8,000 years. Some of these pieces are clearly of buffalo, horses and white men. Others are a bit more bug-eyed and oddly shaped. These are what many believe are drawings of ancient aliens.

Whether you believe in ancient aliens and UFOs or not, (most of) these works of art are worth a glance. You never know what you will see, believe or disbelieve.