Remember E=MC2? This was Einstein’s precursor to his General Theory of Relativity that describes how mass affects space and time, which are fundamentally interconnected. “It is a theory not only of curved space but of curved or warped time as well” (Hawking). The big question that physicists have been pondering for decades is, can space and time warp so dramatically that certain points in time touch or overlap, making time travel possible? The following story of Santiago Flight 513 was just a story, as far as we know, but it’s an intriguing piece that highlights our fascination with the idea of time warps. 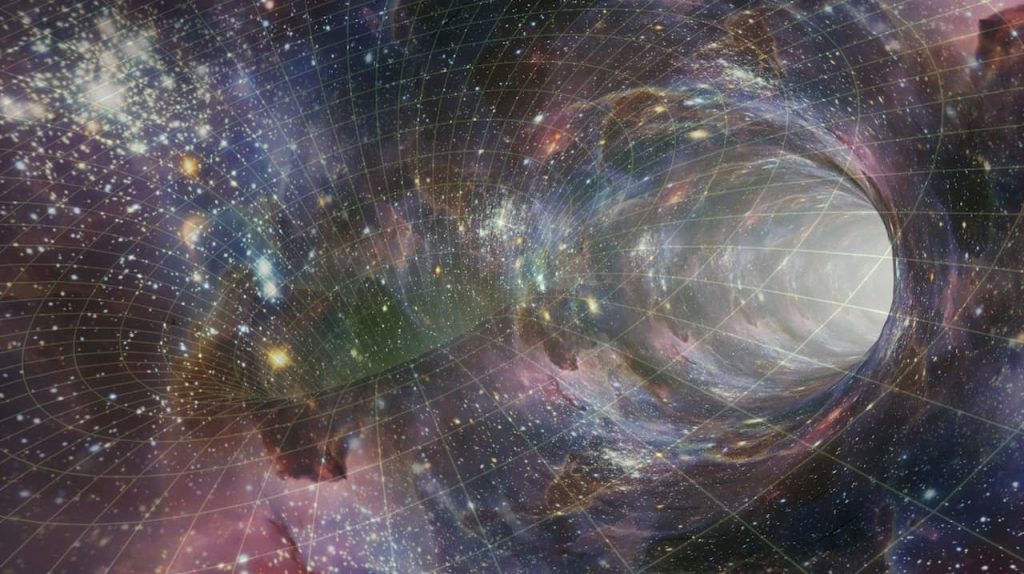 Space-time warps, wormholes, and time travel have had a prominent place in science fiction for decades. CC0 modified.

Much has been written about air travel since it was first commercially available for holiday-makers. One enterprising newspaper reporter by the name of Irwin Fisher published “1950s Airliner Lands with 92 Skeletons on Board,” in the Weekly World News tabloid magazine on November 14, 1989.

Santiago Flight 513 departed from Aachen in what was then West Germany on September 4, 1954. On board the Lockheed Super Constellation were 88 passengers and four crew members. The flight was just another typical and routine trip

between two cities. The passengers would have had no reason to think twice about it.

Somewhere over the Atlantic, though, something happened. The flight disappeared without a trace and never arrived at its destination. That was until October 12, 1989, when it made an approach to Port Alegre, circled the airport and made a successful landing. During 513’s descent, the crew neither made, nor acknowledged, contact with local air traffic controllers.

Unsure about the situation, airport authorities sent a team out to investigate. While the aircraft itself might have been less technologically advanced, it might not have looked totally out of place. However, the airline, Santiago, had ceased operating in 1956. More pressing questions took precedence over this one, though. 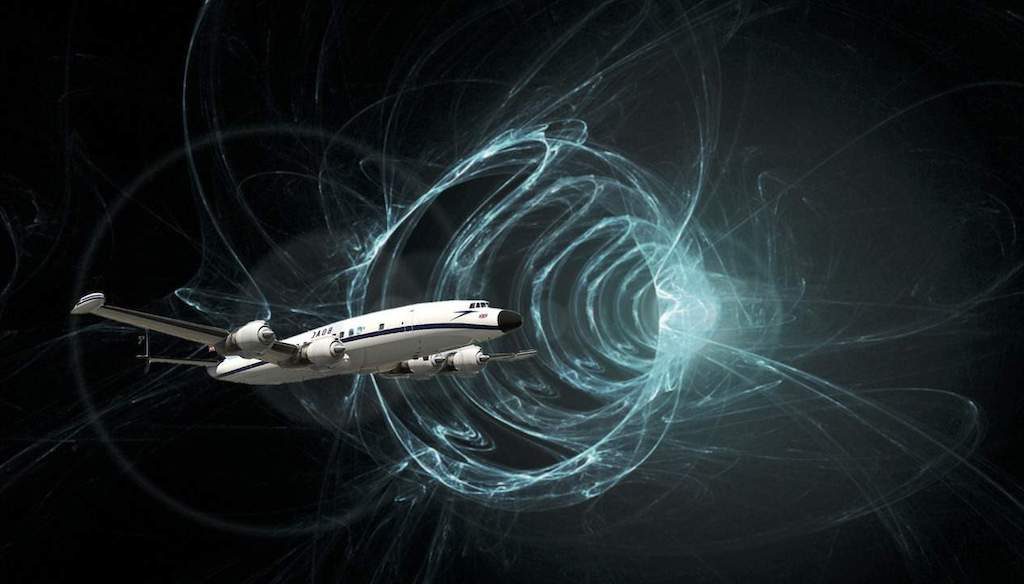 In the story, the Lockheed Constellation Santiago Flight 513 took off in 1954 and reappeared 35 years later.

When security forces gained access to the plane, the reason for the lack of communication was immediately clear. Answering that mystery only opened a deeper and much more pertinent one. First responders came across the gruesome sight of 92 skeletons all sitting in their seats. The skeleton of Miguel Victor Cury, the captain, still had hold of the controls and the engines were still idling – something that can only be accomplished with the aircraft safely on the ground.

No sooner had the gruesome discovery been made, explanations and theories were proposed and debated. Among these was the rather obvious theory of a hoax or urban legend. At least one researcher into the realm of paranormal events went on record to declare that the only possible explanation that fits all of the reported details is that the aircraft utilized a time-warp. However, Dr. Celso Atello was unable to explain the reduction of all on board to a skeletal state. Nor could he adequately fathom how the skeleton-Captain could have possibly landed the plane.

Officials from the Brazilian government did investigate the circumstances of the flight but outright refused to be drawn on any conclusions or any aspects of the investigation as a whole. Aviation officials only confirmed that the aircraft appeared out of thin air and landed safely.

Anger Over the Coverup

The debate over what happened took on a whole new outlook when the perceived secrecy behind the investigation angered many, including Dr. Atello. Researchers made numerous calls to the government and asked them to allow civilians to assist in the ongoing investigation. Other academics and dignitaries were quick to jump on the bandwagon and insisted that the public had a right to know what was going on. They felt that the government had a duty of care to actually ‘come clean’ and reveal what they knew.

Retired physics professor Roderigo de Manha believed that it was a crime against science to withhold any known information, no matter what it was. He stated, “If this plane did enter a time warp and there is evidence to prove it, the entire world should be told. Something like this could change the way we view our world and alter science as we know it.”

A counter-argument to this was that the government could reveal what many people considered to be the truth and risk an all-out panic, or they could keep quiet and risk involving themselves in a cover-up. 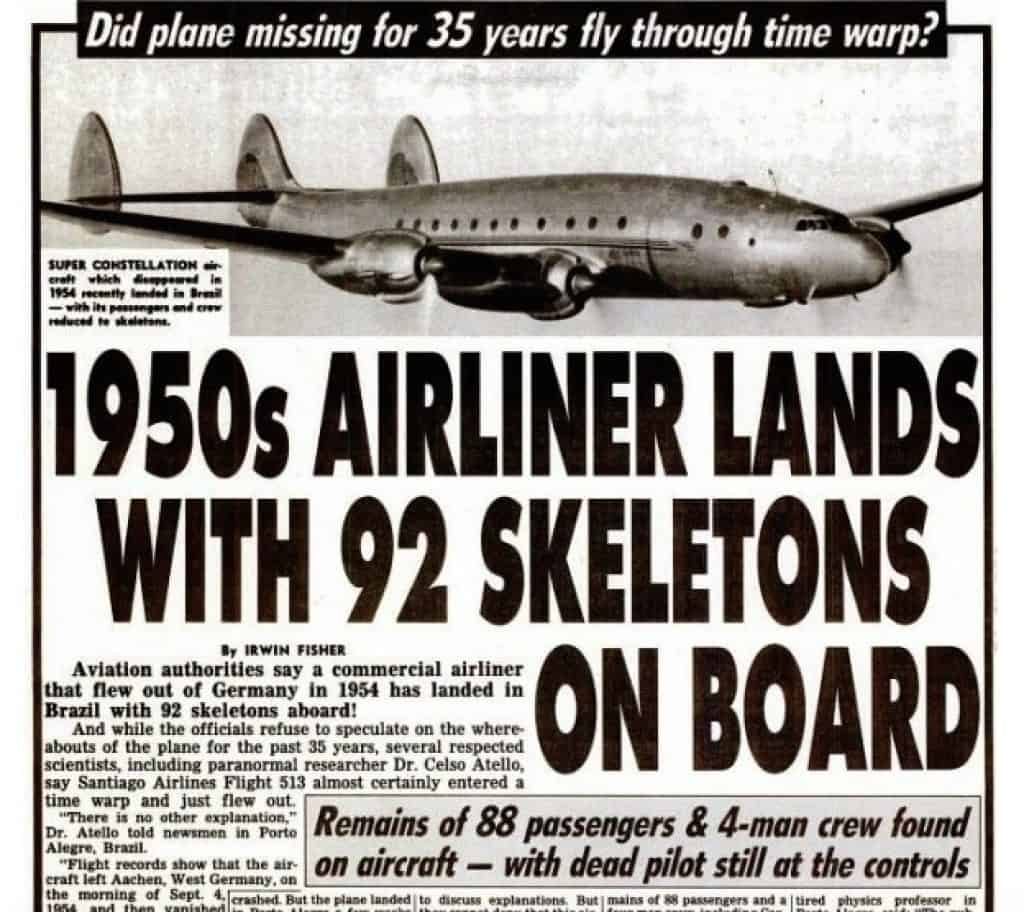 A Place for Science Fiction

Critics of the Flight 513 story insist it’s nothing more than an urban myth or attempt to sell newspapers. However, there is a cherished place for our science fiction stories. Numerous popular books and movies about time warps such as Back to the Future or The Philadelphia Experiment, not to mention, great science fiction TV shows such as Star Trek, sparked the imaginations of many future scientists.

In countless cases, science fiction has become science fact. Atomic clocks have demonstrated the space-time relationship by showing how time speeds up the further away one moves from the center of the earth or large masses, like mountains. The reduction of gravitational force causes an atomic clock to run quicker. On the contrary, time slows down when traveling at a high speed. Scientists have also confirmed Einstein’s theory by observing how the sun warps space by seeing light or radio waves bend around it.

Some of the most spectacular scientific discoveries in history began with the seeds of wild fantasies and science-fiction. Is it really feasible that a transatlantic flight could take off in one generation and disappear for 35 years before it re-appears and lands safely with its dead crew aboard? Probably not. Perhaps time travel may never be a reality either. But within the stories like Flight 513, the imagination is an unbounded playground where one can take that trip through the proverbial wormhole. So, enjoy the journey.

Additional Sources:
The Night Sky
Unknown But Not Hidden