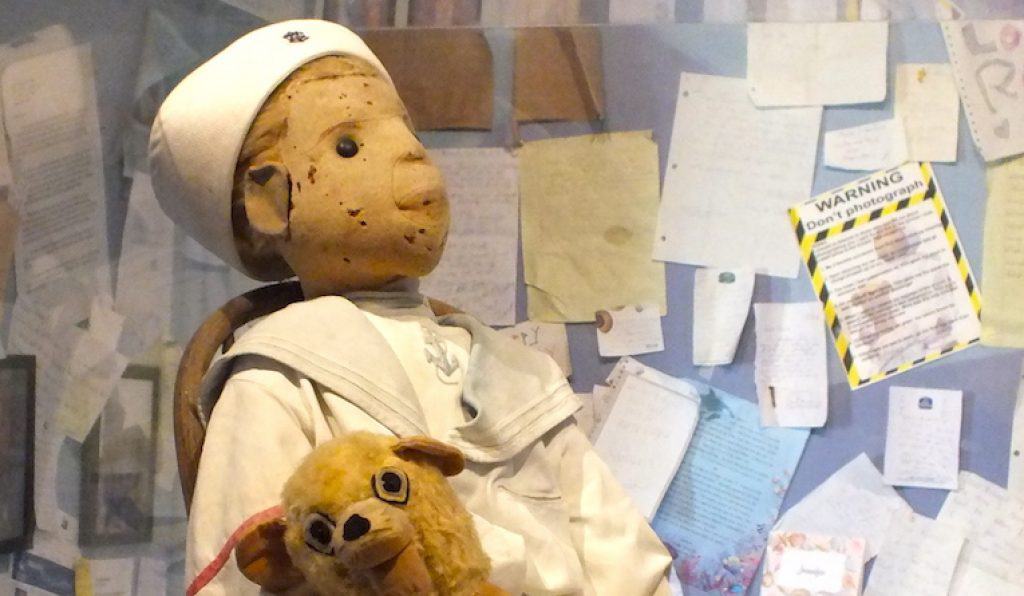 Robert the Doll. Image: Cayobo from Key West, The Conch Republic (Robert The Doll Uploaded by LongLiveRock) [CC BY 2.0]

From the somewhat unlikely location of Key West comes the story of Robert the Doll. This weathered turn of the century toy has a somewhat bland facial expression and skin tone. His eyes are round, small and inexpressive when most people are looking. He sits inside a display case at the Fort East Martello Museum in a chair that is just his size. In one of his arms is a stuffed toy of his own. On his head is a sailor’s cap that matches the 1800s naval officer motif of his outfit. Why is he kept so neatly in a museum? Well, stories say that the Doll is quite evil.

Inspiration for the Chucky Film Series

The early stories of Robert the Doll seem like a popular horror movie plot. If you mixed some elements of “Skeleton Key” (2005) and the Annabelle Doll back-story of “The Conjuring” (2013), you would get something similar to the tales surrounding the Doll. It actually did help inspire the Chucky film franchise, but the only real similarity is the evil doll. What makes Robert’s story even better is that it goes back to more than a century ago, which we must admit makes almost any horror story better.

Naming the Doll after Robert Otto

In 1906, a house servant at 524 Eaton St. in Key West gave the mansion’s owner’s young son a doll named Robert and named it after him. The boy would later go on to use the name Eugene Otto, who eventually became a well-known artist. But the name Robert stuck with the doll which became simply known as Robert the Doll. According to stories, there was something evil about the doll from the beginning. The fault is placed on the woman who gave the doll to Otto. She supposedly cursed it or invited an evil spirit to possess the doll using voodoo.

Otto Converses with Robert the Doll

As evil dolls all want to do, Robert began speaking to his little owner, who spent all of his time with the doll. The Ottos could hear their boy talking to Robert and hear a different voice respond. But they initially thought their son was talking to himself using a different voice. When the lad got into trouble, he would blame it on Robert. Some tales of Robert the Doll claim that Otto continued to blame the bad behavior of Robert when he was an adult. But there is not enough evidence to accuse the man of any bad behavior, let alone passing the buck to a doll from his childhood.

Neighbors and people who walked by the Otto house in Key West would notice Robert the Doll moving from window to window in the home. Some even say he ran through the rooms giggling in such a way as to frighten those who heard it when his owners were not home. It is uncertain why the doll was not thrown away. Quite the contrary happened; Eugene Otto kept the Doll in his house indefinitely. Even his wife made renters of the home keep Robert in a special room after Eugene passed away.

In a Museum, but not Resting

Eventually, the house passed to new owners, who found Robert in the attic. They had a young daughter who became terrified of the doll. She claims that it wanted and even tried to kill her. To this day, she repeats that story, according to fans of the tale. In 1994, Robert the Doll finally left the Victorian mansion on Eaton St. and made his home at the museum.

Visitors and some museum workers claim he moves. Reports state that he curses those who take his picture without permission and nods to give his assent to those who ask nicely.