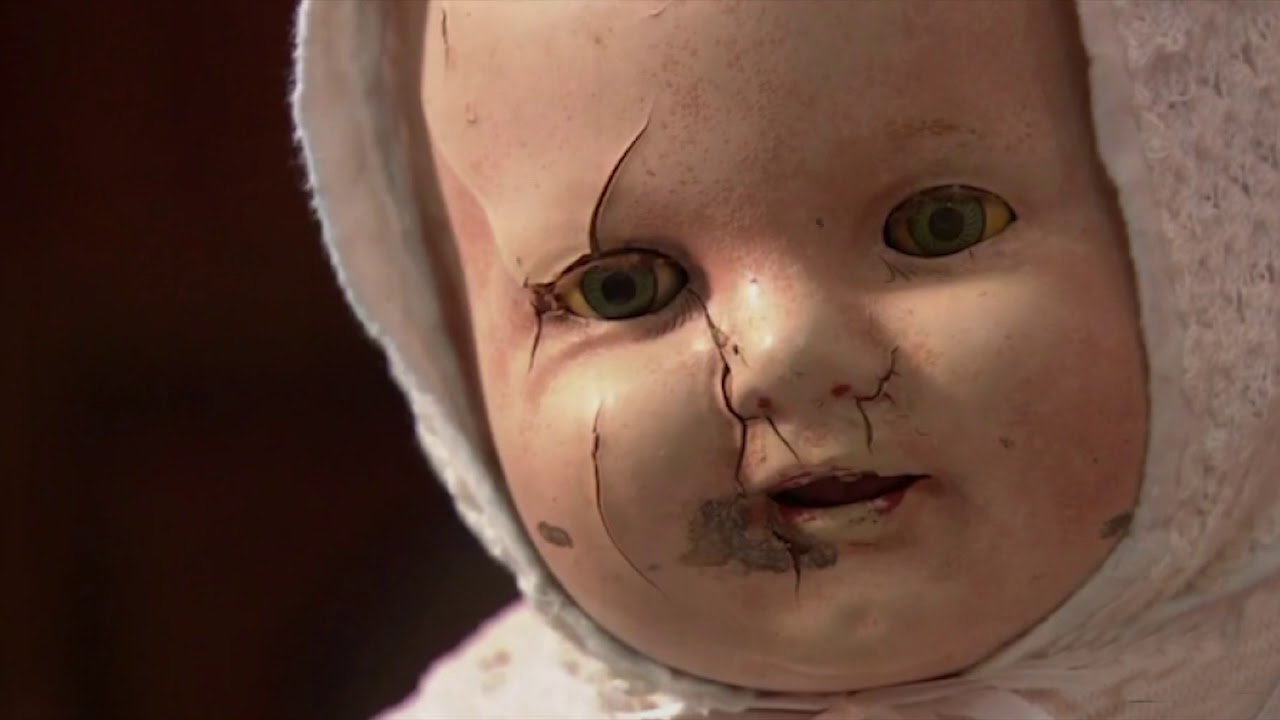 Are Haunted Dolls Possessed by an Evil Spirit?

Dolls are fun. We talk to them, give them names and brush their hair, and in return, they bring us laughter, allow us to snuggle them, or simply keep us company when we feel lonely. However, these dolls you’re about to see should never be played with. These are haunted dolls.

A haunted doll is a handmade or manufactured doll or stuffed animal that is purported to be cursed or possessed in some way. This ties in with the history of dolls which have traditionally been used in magic and religious rituals throughout the world. The earliest report of a haunted doll goes back to Egypt where the enemies of Ramses III attempted to use wax images of his likeness to bring about his death. The dolls used in this ritual were said to be living and would curse anyone who bore their resemblance.

Robert Gene Otto named Robert the Doll. According to one story, Robert Gene’s grandfather gave him the doll as a present from Germany. In contrast, other rumors surfaced about a Bahamian girl who supposedly gave the life-sized voodoo doll to Robert. Either way, Robert Gene became so obsessed with the doll that he gave it his own first name and began referring to himself by his middle name, Gene. He gave Robert a lot of energy and attention, even making a room for him in the attic with toys and furniture and his own teddy bear. Gene treated Robert like a real person. Over the years, if Gene’s parents accused him of any wrong-doings, Gene would always blame Robert the Doll. People described Gene’s relationship with the doll as “unhealthy.” 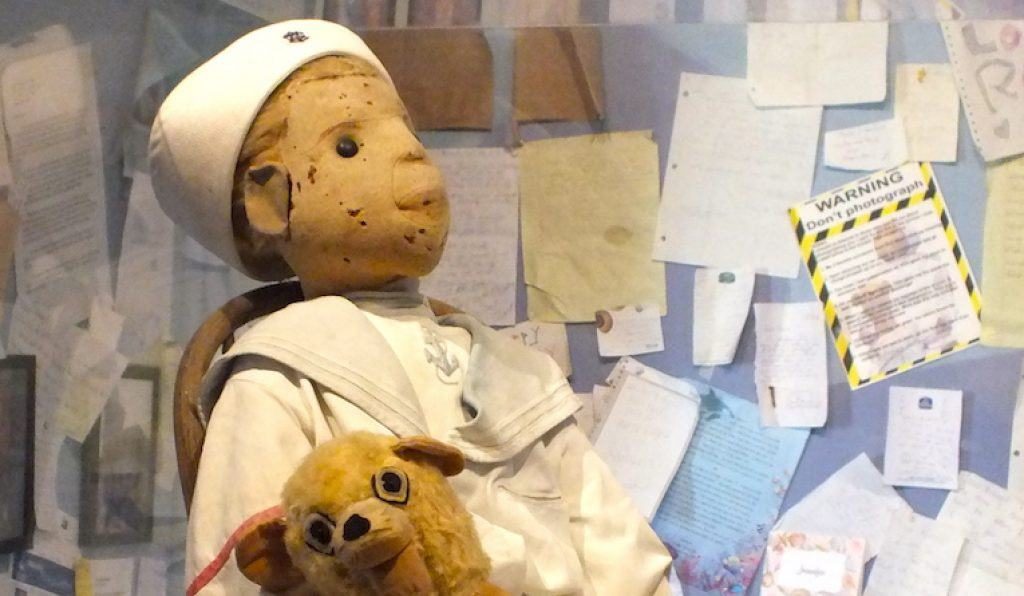 Robert the Doll. Image: Cayobo from Key West, The Conch Republic (Robert The Doll Uploaded by LongLiveRock) [CC BY 2.0]

Gene later became an artist. He kept Robert throughout his lifetime, but after he died, Gene’s wife, who hated Robert, locked him in a cedar chest in the attic and sold the house. Myrtle Reuter became Robert’s new owner. She kept Robert for several years until she donated him to a museum, at which time she told the museum about Robert’s “specialness.”

Even after Gene’s death, people continued to blame Robert the Doll for wrong-doings. Folks said they heard footsteps and giggles in the attic, and multiple witnesses said he moved around on his own. He has a new home now in the Fort East Martello Museum in Key West, where he continues his pranks causing the cameras and lights in his area to malfunction.

Hand made of carved wood and real human hair, Letta the Gypsy Doll is a frightening sight to behold. She has a horrifying effect on people and animals that come into contact with her. Letta is a “real person, his energy is real,” says an Australian psychic. 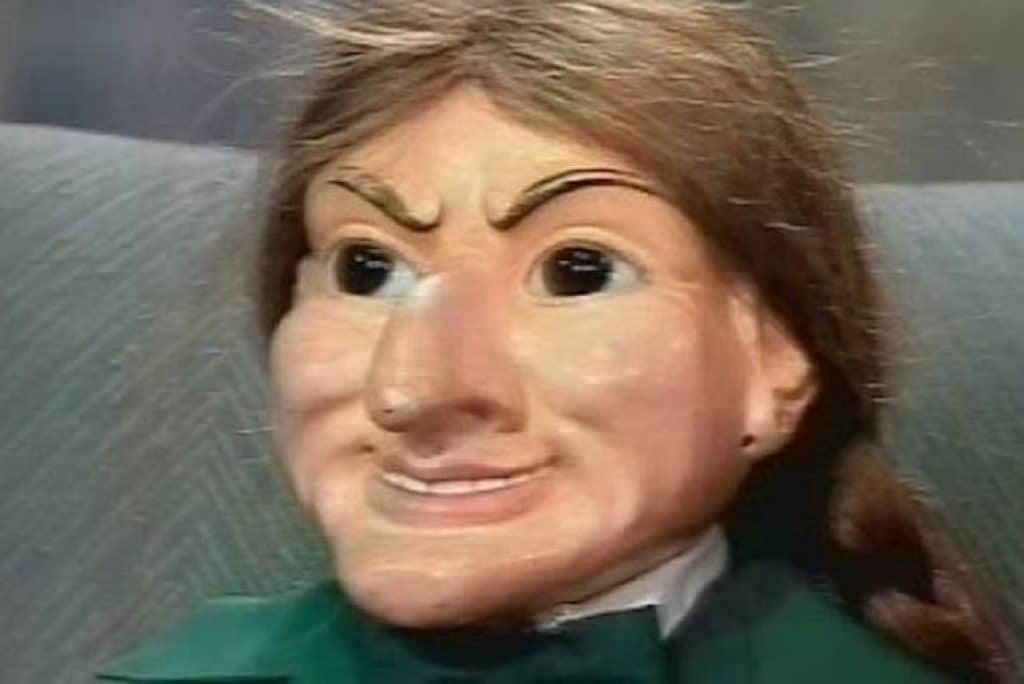 Kerry Walton, of Brisbane, Australia, stumbled upon Letta while searching for antiques under a dilapidated old house. The doll seemed to behave in unnatural ways as soon as he discovered it. The bag containing the doll rustled in the back of his car. Its facial expressions seemed to change from day to day, and dogs had a vicious response to it. Also, children in the family were having nightmares, and Letta’s head, arms, and legs would move on their own.

Kerry tried to sell Letta, but when he attempted to take him out of the car to deliver it to the new owner, he felt strangely compelled to keep it. He decided not to sell, and instead, try to learn more about it. This led him to a museum in Sydney, Australia. An expert told Kerry that the two nails in the bottom of Letta’s feet dated the doll to about 200 years old. The expert also determined that Letta was from Eastern Europe.

The Australian psychic conducted a seance and determined a man who was grief-stricken because his son drowned made the doll. The doll was to serve as a type of transference vessel for his dead son’s spirit, and today, everyone who comes into contact with Letta the Gypsy Doll says that it seems alive.

As far as haunted dolls go, Annabelle is probably the most famous. The demon-possessed Annabelle Doll served as inspiration for the film “Annabelle” and was used as a plot point in the film “The Conjuring.” The latter film was based on the life of the doll’s current owner, Lorraine Warren, a psychic, who along with with her now deceased husband, investigated hauntings of all sorts. Not surprisingly, a number of their assignments involved haunted dolls. 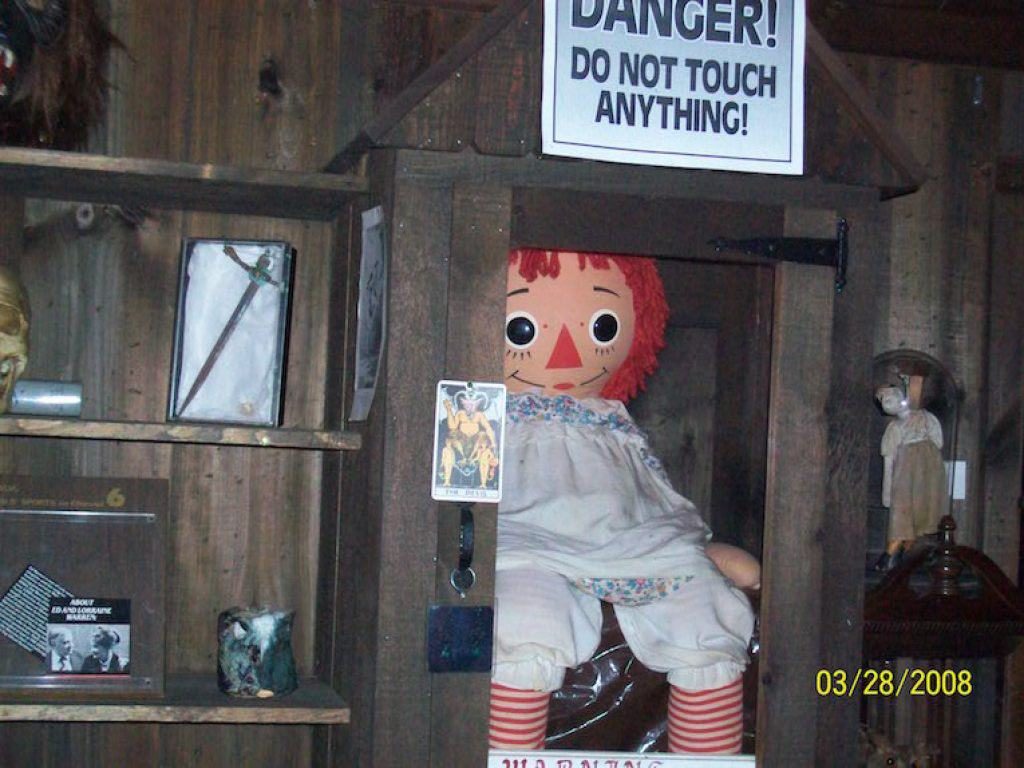 The doll itself is actually a Raggedy Ann doll, which appears less frightening than the one that portrayed Annabelle in the movie. The original owner hired a psychic who told them the doll contained the spirit of a dead girl named Annabelle Higgins. Later, the Warrens suggested that a demonic entity was in the doll.

As the story goes, Annabelle Doll choked a roommate’s fiance while he was sleeping over. It would also change positions and sometimes change rooms altogether. Additionally, it was leaving messages on strange pieces of parchment paper. However, there was no parchment paper ever in the house. Oddly, the roommates also found weird drops of blood on Annabelle.

Annabelle is currently at the Warren’s occult museum, where other haunted dolls also live. Above Annabelle, there is a large sign on the case that reads, “Warning, positively do not open.” Supposedly, people have died in mysterious accidents after having verbally mocked Annabelle at the museum.

Mandy is a doll that was made in Europe in the early 1900s. The woman who owned her eventually donated Mandy to the Quesnel and District Museum in 1991. Mandy has become a popular attraction for tourists who come to see the old, disfigured doll. The museum claims that she affects staff and visitors in unexpected ways. They feel afraid or creeped out. Objects disappear or move around on their own. Visitors’ electronics go awry when taking pictures or recording the doll. Interestingly, they had to put Mandy in a case all by herself, because she was causing mischief by knocking down other dolls in a shared case. It seems she didn’t play well with others. 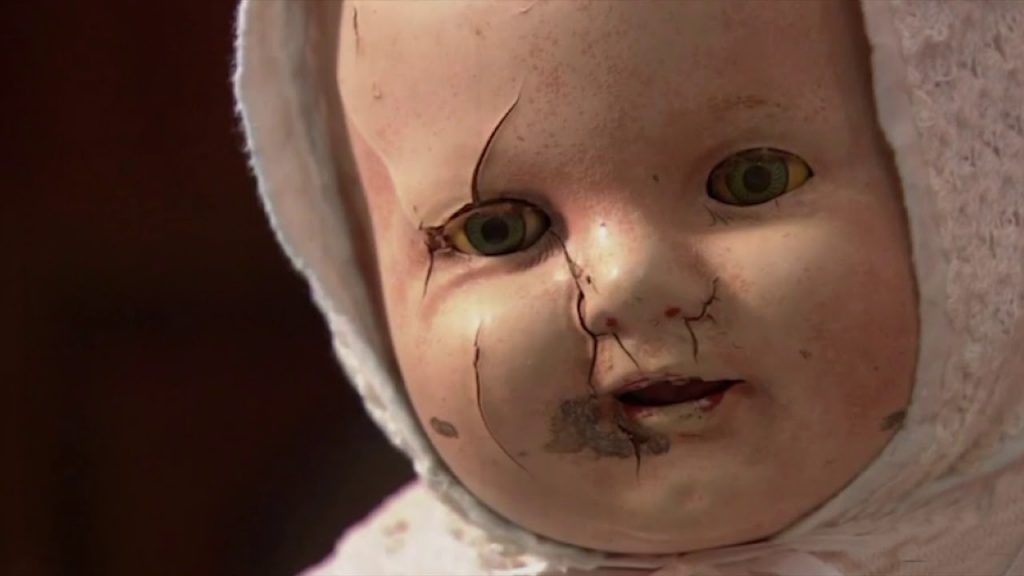 When the woman donated the nearly century-old doll, she told the museum that she could often hear Mandy crying from the basement in the middle of the night.

Joliet is a strange doll that belongs to a woman named Anna. Joliet has been in Anna’s family for four generations. A friend of the family gave Joliet to Anna’s great grandmother as a baby shower gift when she was expecting a child. However, this friend was not a true friend; she harbored envy and malice, though it is unclear why. The doll brought a curse into the family, and therefore, negative things began to take place.  The curse would dictate that each woman, starting with Anna’s great grandmother, would have one boy and one girl. Each boy would die soon after being born, while the daughter would grow up to perpetuate the curse.

This is exactly what happened. First Anna’s great grandmother. The same thing would happen to Anna’s grandmother, mother, and ultimately her. She too had a boy that died three days old. 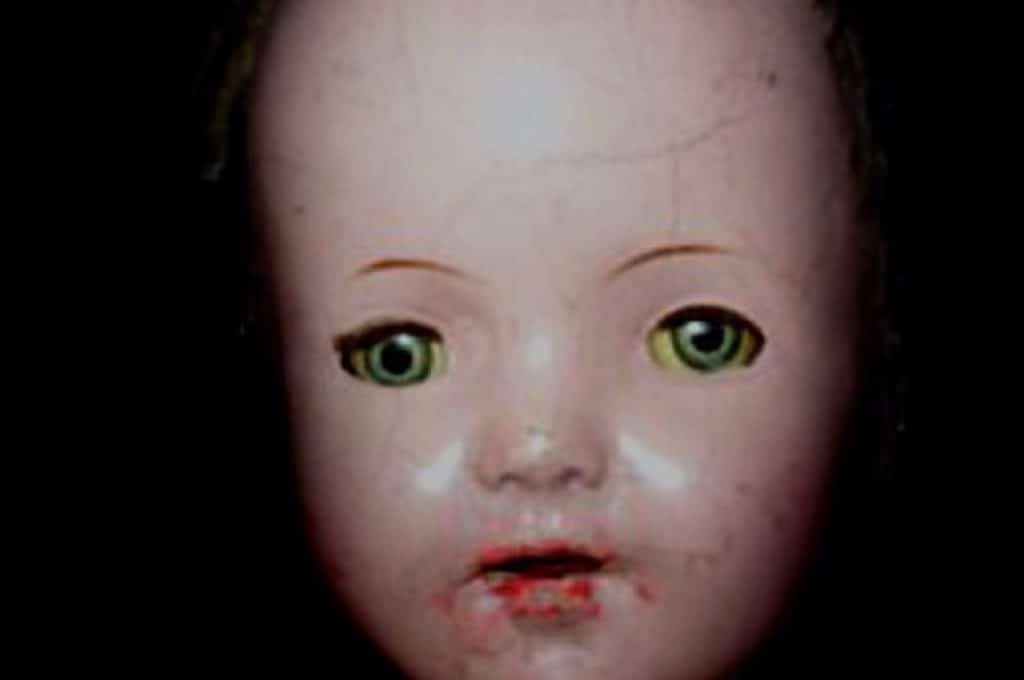 The doll currently possesses four spirits, and the family refuses to part with it. They can now hear multiple cries coming from Joliet, and they truly believe the spirits of those four children are in Joliet. They will continue to care for the doll as a part of the family, and Anna’s daughter will one day inherit Joliet, who will wait patiently for her next victim.

Haunted dolls come in all shapes and sizes. Many may seem sweet and innocent, but they possess something macabre about them. Could they harbor spirits? Demons? Can these supposed haunted dolls really harm us? Many people believe that these evil dolls are waiting for their next unassuming victim to adopt them and give them a home and ultimately someone to terrorize. So the next time you look to buy a doll…be careful. It just may be haunted.