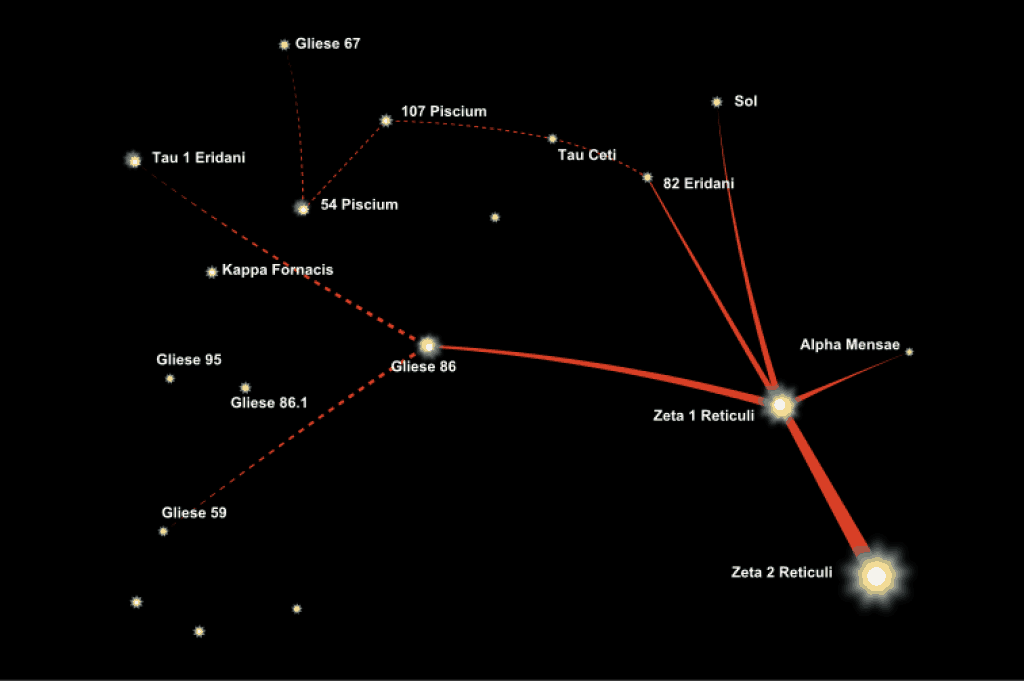 Does Serpo reside in the Zeta Reticuli system? Cc-by-sa-2.5

If an anonymous statement sent to an American UFO discussion group is to be taken at face value, then the lone survivor of the Roswell crash in 1947 was instrumental in organizing a super secret Government program entitled Project Serpo. The author of this series of emails refused to go into personal details beyond his admission that he was a retired Government employee that had an active role in the program.

The Lone Survivor of the Roswell Crash

The remaining survivor was ferried to a top-secret military facility and granted permission to contact other members of his civilization using equipment salvaged from the crashed UFO. Military personnel learned that the survivor was a member of an alien race known as the Eben. The Eben lived on a world they called Serpo, which is located within the Zeta Reticuli star system, best known as the origins of the visitors documented in the Hills abduction of 1961. This Eben continued to work as an intermediary for both the US Military and Eben people until its passing in 1952. Dialogues between worlds continued for another decade until a meeting was scheduled to take place in Alamogordo, New Mexico, in April 1964.

When the Eben ship touched down, the visitors were allowed to reclaim their deceased brethren and conducted additional negotiations in English for another year to establish the parameters for the exchange program. Project Serpo was underway. A dozen military specialists were carefully selected to participate in this exchange and tasked to gather as much intelligence about the Eben people as was possible. Information gathering focused on all aspects of life on their planet, including their society and political agendas, the Eben technological capabilities and Eben’s home. The ten men and pair of women were scheduled to remain on Serpo for a decade and then be transported back to Earth for a debriefing.

The 37 light year journey took a reported nine months to complete. When the intrepid dozen arrived at Serpo they discovered that the Eben planet was like the Earth in many ways. It was slightly smaller in size but the atmosphere was consistent to that of Earth’s. One major difference was the parent star or stars. Serpo was a binary star system that meant elevated levels of heat and radiation. Two of the men chosen to participate quickly succumbed to the conditions and perished. The remainder took several years to acclimatize to these conditions but ultimately did so.

The ten had to remain covered up at all times and were not able to dress inappropriately due to their living conditions. They had more than extreme heat and radiation to contend with though; food was a crucial factor that every member was enforced to overcome. Despite being sent on a decade-long mission, their food supply was only sufficient to last for a couple of those years. When the time came, this was a challenge that all members managed to adjust to. Another factor that they were also faced with was the Serpo day. At 43 hours in length, it was almost twice the typical Sol day. Evenings and nights never got sufficiently dark. This may be a result of the smaller star that bathed the nighttime hours in ambient light that resembled twilight.

1975 came and went without any word from the participants or Ebens. Eight of the dozen finally returned to Earth in 1978, three years overdue. The remaining couple, one of the men and women, opted to remain on Serpo. The reasons were never disclosed, at least officially. Those that did make the return trip were kept in isolation for a further six years. During that time they were thoroughly debriefed. According to the reports, each one of them had difficulty readjusting to life back on Earth after Project Serpo. Eventually, they all died of radiation sickness.

While the team was stationed on Serpo, they were given the freedom of the planet and used this chance to fully explore. Serpo had no oceans and precious few mountains. Flora mainly consisted of several species but was chiefly found in the cooler polar regions. Much like Earth, Serpo had indigenous animal life that was utilized as tools of work and not sources of food. Eben food came from any one of several industrial methods.

The majority of the 650,000 inhabitants lived in a single large city but consisted of several individual communities. The Eben did not have a specific governing body but did employ a hierarchical leadership system. A Military was reported but weapons were never used and violence was completely unheard of. All citizens were issued with whatever they needed on a ‘need to use’ basis and basic commerce was not in effect. This does sound like a Utopian society taken straight out of the Star Trek universe. The Eben was the only civilization on Serpo and their lives were disciplined and scheduled strictly on Serpo’s solar day.

The fate of the crew who returned is recorded but what of the couple that remained on Serpo? The Eben has not been forthcoming about that. The last known contact with them is said to have taken place sometime in 1985. There is the possibility that Project Serpo is just the latest in a long line of disinformation released to a public with an insatiable appetite for UFO and alien conspiracy theories. A dedicated website has been created that chronicles this story in a more detailed fashion.

Other Resources:
Biblioteccapleyades
Before its news
The Night Sky