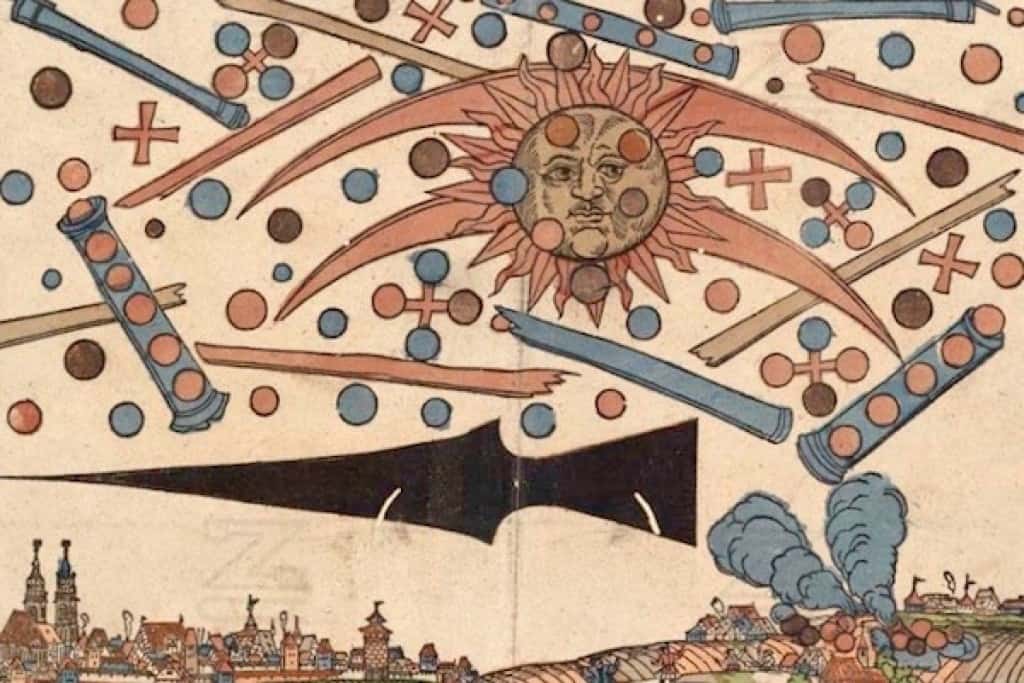 From the moment a pilot described seeing nine objects flying in formation just a couple of years after the Second World War, UFO sightings have been on a steady increase. More recent reports are often accompanied by photographs and/or video footage. Believers will take this proof at face value, while skeptics will rally to debunk reports. These choices are usually based on personal belief as opposed to the evidence presented. In other words, it is all down to personal interpretation. So how did people react to the Nuremberg UFO phenomenon which occurred on a spring morning back in 1561?

Hanns Glaser was a journalist of sorts, producing depictions of events in the form of woodcuts. His most famous work has courted controversy and debate for nearly 500 years now. The Nuremberg Gazette also recorded the events either as eye-witness testimony or as a result of Glaser’s work. The account was in German, but a translation into English reveals precisely what occurred.

In the morning of April 14, 1561, at daybreak, between 4 and 5 am., a dreadful apparition occurred on the sun, and then this was seen in Nuremberg in the city, before the gates, and in the country – by many men and women. At first there appeared in the middle of the sun two blood-red semi-circular arcs, just like the moon in its last quarter. And in the sun, above and below and on both sides, the color was blood, there stood a round ball of partly dull, partly black ferrous color. Likewise there stood on both sides and as a torus about the sun such blood-red ones and other balls in large number, about three in a line and four in a square, also some alone. In between these globes there were visible a few blood-red crosses, between which there were blood-red strips, becoming thicker to the rear and in the front malleable like the rods of reed-grass, which were intermingled, among them two big rods, one on the right, the other to the left, and within the small and big rods there were three, also four and more globes. These all started to fight among themselves, so that the globes, which were first in the sun, flew out to the ones standing on both sides, thereafter, the globes standing outside the sun, in the small and large rods, flew into the sun. Besides the globes flew back and forth among themselves and fought vehemently with each other for over an hour. And when the conflict in and again out of the sun was most intense, they became fatigued to such an extent that they all, as said above, fell from the sun down upon the earth ‘as if they all burned’ and they then wasted away on the earth with immense smoke. After all this there was something like a black spear, very long and thick, sighted; the shaft pointed to the east, the point pointed west. Whatever such signs mean, God alone knows. Although we have seen, shortly one after another, many kinds of signs on the heaven, which are sent to us by the almighty God, to bring us to repentance, we still are, unfortunately, so ungrateful that we despise such high signs and miracles of God. Or we speak of them with ridicule and discard them to the wind, in order that God may send us a frightening punishment on account of our ungratefulness. After all, the God-fearing will by no means discard these signs, but will take it to heart as a warning of their merciful Father in heaven, will mend their lives and faithfully beg God, that He may avert His wrath, including the well-deserved punishment, on us, so that we may temporarily here and perpetually there, live as his children. For it, may God grant us his help, Amen.

Reactions by the Public

Perhaps this was an account that suffered from some artistic license or embellishment, but something really must have taken place. Readers of this might have experienced a second-hand fear of their own imaginings. Just imagine how the witnesses must have felt seeing this phenomenon – whatever it actually was. If these people felt any fear or intimidation, then it was a very genuine and real feeling. Since this event unfolded before their eyes in excess of an hour, witnesses must have substantially grown in numbers. Some must have been far too curious to contain themselves while others felt morbid fear. And yet they all still came to see.

But what was it that they came to see? Interpreting this as a UFO dogfight between a pair of warring alien races is an easy conclusion to achieve. Some people believe this battle was a result of a time-travel paradox where Allied and Nazi aircraft fought a pitched battle in the skies of 1940s Nuremberg that somehow was witnessed by 1560s residents. To simply label this event as an out and out hoax does seem to be a little heedless since the descriptions are described so vividly.

Celestial Phenomenon over Basel in 1566

Quite possibly the most remarkable thing about this account is the fact that it isn’t the only one recorded. Just over five years after the Nuremberg spectacle, an almost identical sighting occurred in the skies of the Swiss city of Basel. According to the written records of this encounter, it lasted considerably longer than the Nuremberg sightings. This time the event took place on 7 August 1566. Just like the previous dogfight, it took place in the early morning hours. People reported large dark balls moving through the air at high speeds, apparently heading for the Sun. These balls also made half turns and collided with one another. A large number of balls altered to a red color and disappeared from view.

Did medieval residents of two European cities witness an alien war taking place? If so, was it the same war on both occasions, or separate battles of the same conflict? What were they fighting for? These are all questions that a medieval woodcut simply cannot answer.