Find out where the most haunted places on Earth are. 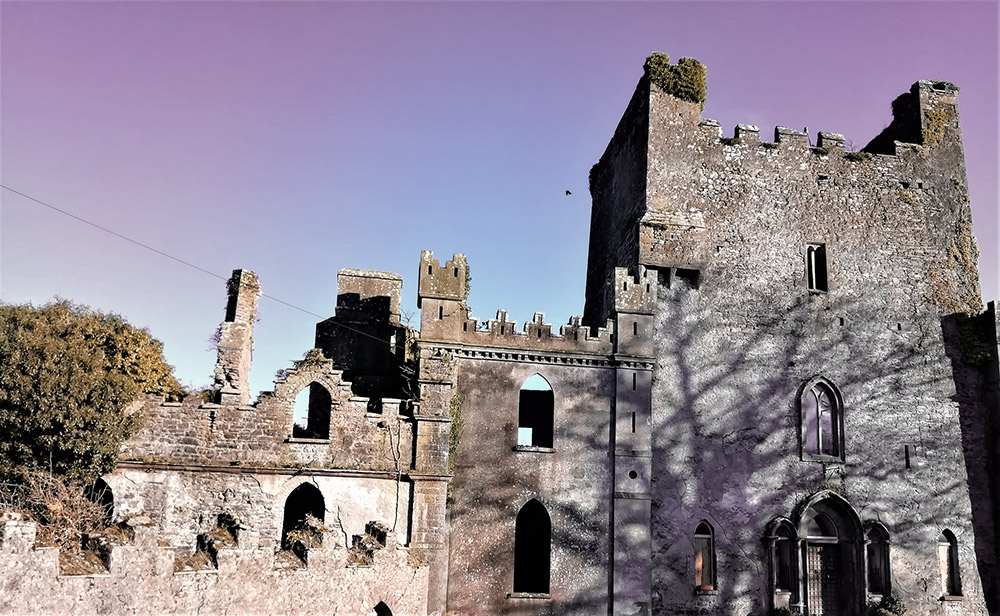 Leap Castle is one of the most haunted places on Earth.

The list of haunted places on Earth is extensive. The steep history of hauntings, poltergeists, and paranormal events spans across the globe in diverse landscapes and different cultures. In these notorious paranormal hotspots, otherworldly phenomena might compel even non-believers.

With creepy stories, haunted castles, and bizarre tales, we’ve pulled together a list of the eight most haunted places on Earth.

Located in one of the most superstitious countries, Leap Castle is uniquely haunted by both a spirit and an elemental. This Coolderry, Ireland haunt was constructed in the 16th century and has never been abandoned. Indeed, the current residents say strange occurrences and mysterious figures often plague them.

The history of the Leap Castle proves to be surrounded by struggle even before it was constructed.

According to legend, the O’Bannon brothers set out to build the castle but could not set aside their dispute over who would rule. So, to settle the affair, they proposed a deadly challenge. The two brothers would leap off the rocks, and the one who survived would become chief and claim the castle.

The legend of the elemental is similarly shrouded in mystery. While there have been many theories over the years as to the creature’s roots, my favorite is in druidic origins. Before the castle was built, the land was untouched and preserved by druids. It’s thought that the elemental was conjured there by the druids to protect the sacred site. Perhaps the elemental stood by an old passage to Tír na nÓg watching over the tether between planes.

In another theory, a woman named Mildred Darby, a spiritualist, and occultist may have awoken the creature while dabbling in summoning spells.

No matter where it is from, the elemental is described as very grotesque. The elemental has large, black, crumbling eyes. The creature’s skin is greenish, and it has loose lips with a jaw is set back into the neck. The claw-like fingers are said to be quite threatening, but most memorable is the distinct smell.

Other spirits are known to haunt the castle include a priest who has appeared in the chapel, The Red Lady, The Murdered Woman, and “The Murder Hole Room.”

Then there is the oubliette.

The oubliette is a small basement discovered in the castle with a cache of bones from approximately 150 human bodies. When the tomb was uncovered, a tremendous amount of energy may have been released from the spirits. This discharge may have woken up the spirts, which raises the hair on more than a few arms. Oubliettes have a bad reputation. (“The Labyrinth,” anyone?) 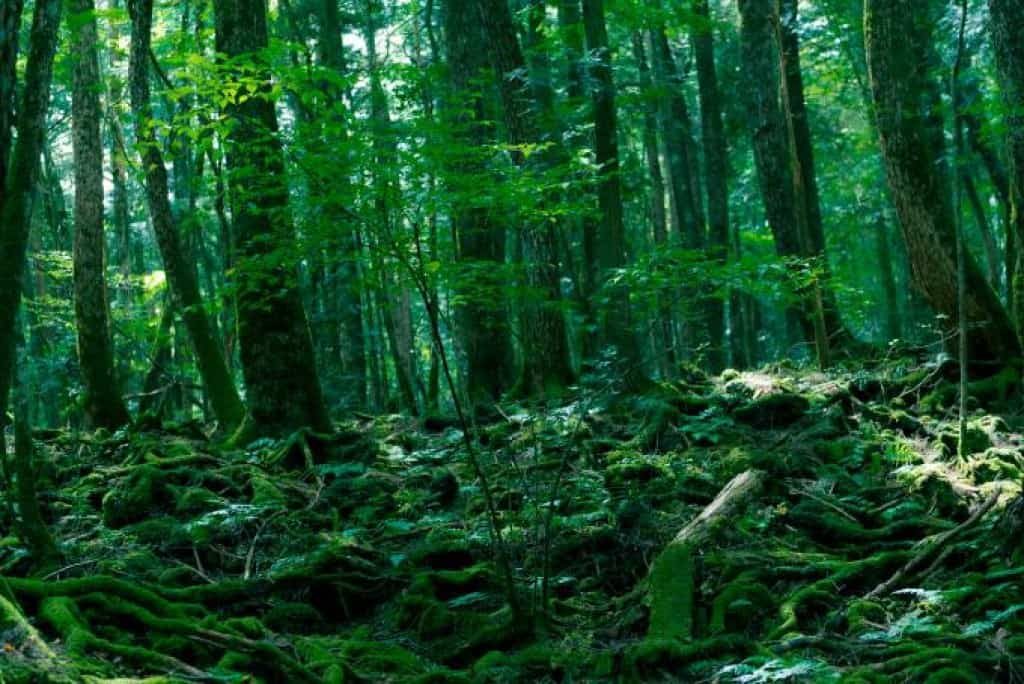 Haunted places do not all have ancient or even centuries-old tales to chill the bones. Some, like Aokigahara Forest, have only recently developed a reputation for ghostly inhabitation. Also known as the Sea of Trees, Aokighara Forest is located on Mount Fuji, Japan.

The sinister reputation began with the popular 1960’s book by author Seicho Matsumoto about a woman who heads into the forest to commit suicide. Over the past few decades, Aokigahara Forest has been the final destination to death’s door for hundreds of people. It is so bad that the forest needs to be searched regularly for bodies–between 50 and 100 bodies are removed annually. Why do so many people die in the Aokighara Forest?

People travel to the forest to commit suicide. It occurs so often there is a sign at the entrance that reminds visitors that “life is a precious gift.” Aokigahara Forest is a sinister place based on this reputation for death alone. 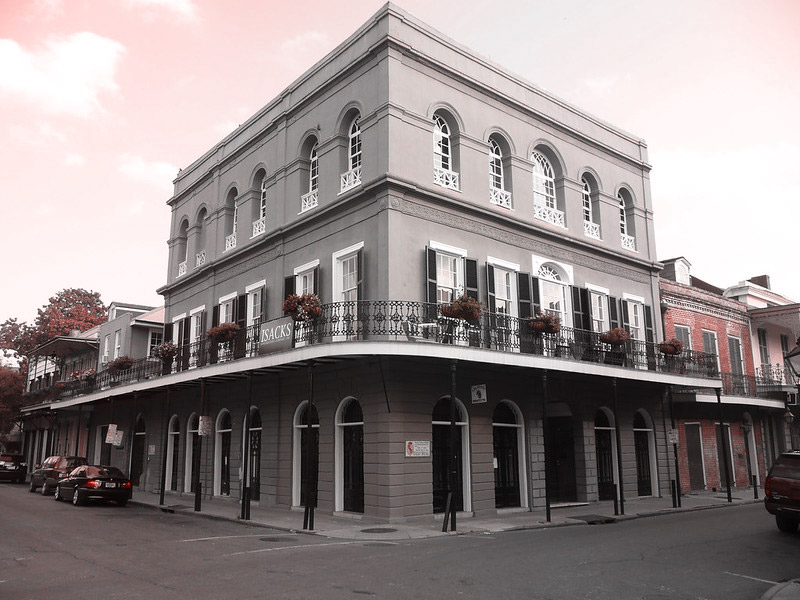 When it comes to New Orleans, it is hard to pin down one place as the most haunted. Between the voodoo practiced in the area, the violent crimes committed there and the natural disaster that partially destroyed it, there is plenty of fodder for spirits. The city is one of the most reportedly haunted places on Earth. Two locations within the city highlight its reputation best.

The LaLaurie House was once home to an avid slave owner named Delphine LaLaurie. This woman was evil and cruel, even by contemporary accounts not linked to tourism. Her cook, who she kept chained to the stove, set fire to the house in 1834 in an attempt to seek rescue. The locals found despicably injured slaves, about seven of them, within the house. People were outraged and Madam LaLaurie ran off, apparently to die later in Paris. 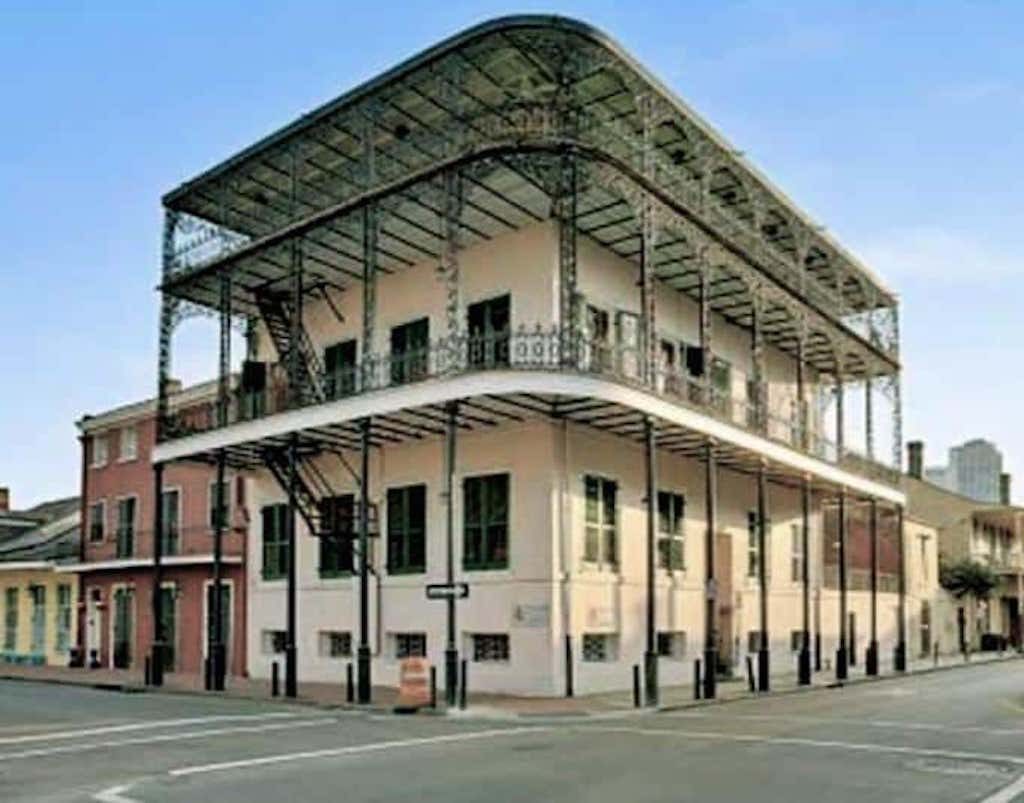 The Sultan’s Palace or Gardette-LaPrete House is another corner home in New Orleans with a long balcony and a sinister history. A Turkish man rented the property in the 1830s for himself, his harem and his eunuchs. The man was known for having secretive parties. But it’s not his life that made this haunted location famous. Someone discovered his hacked body and those of his staff after walking by and seeing blood seeping from under the door of his house. The renter’s identity and that of his killer have never been ascertained.

Evil, brutality, and inhumane conditions lay a fertile breeding ground for the most notorious hauntings. The Eastern State Penitentiary in Philadelphia, Pennsylvania, is one such place. Constructed in 1829, it is the first real penitentiary in America. It was based on the solitary confinement model, in which inmates were kept away from other inmates utilizing tall walls bordering their exercise yards, sound-proof doors, and timed outdoor releases that did not overlap with other inmates. All prisoners ate their lunches alone in their cells until the 1920s. 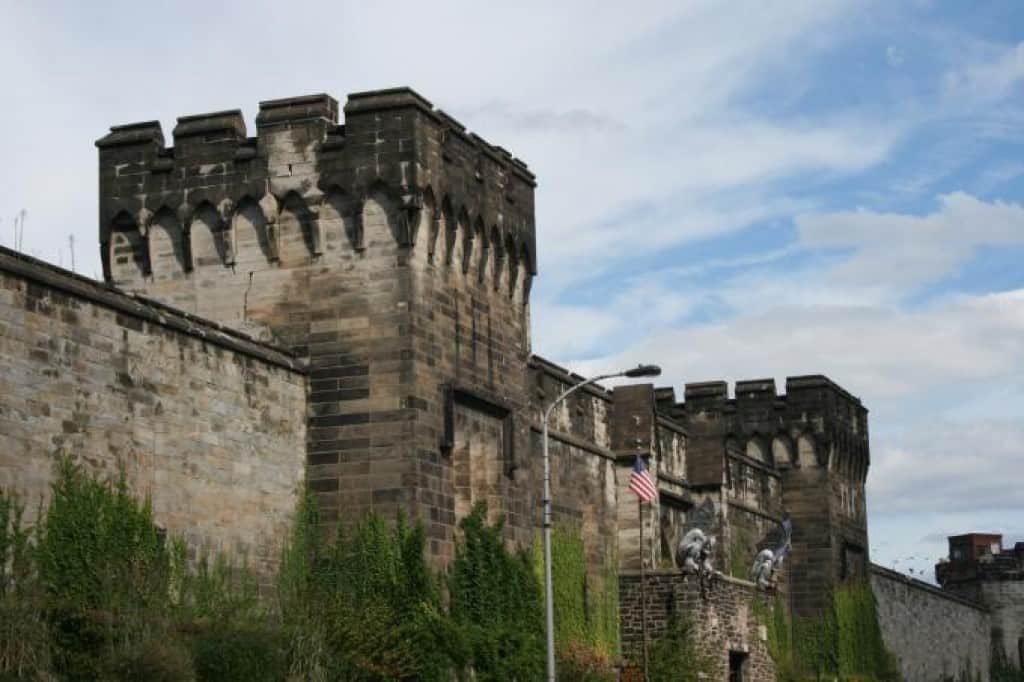 Guards administered cruel and unusual punishments. Guards placed inmates in “The Hole”,  a small pit underground. Here, inmates were subjected to solitary confinement, darkness, lack of air, food, and no toilet. An iron gag, commonly used to control and severely punish slaves, was also used. In this method, the tongue was locked down in the mouth preventing swallowing or struggling. The mouthpiece connected to the hands, which were bound together at the person’s back. Any struggle would tear the tongue and lead to bleeding. The Mad Chair tightly strapped them in from hours to many days, cutting off blood flow so severely that it sometimes led to amputations. The Water Bath used a method in which the prisoner became drenched in ice-cold water and chained up to a wall overnight.

There are numerous stories of disembodied voices and dark menacing shadows lingering the halls of the prison. These stories date back to before the penitentiary shut down, and continue today. According to the last group of guards to walk the empty halls after shutting down the institution, sounds of footsteps, laughter, voices, and dark shadowy figures darted about. Today, many similar tales continue by both volunteers and visitors.

Creepy histories can often leave their ghostly imprints on us into the future, and Danvers, Massachusetts has a significant history. It is a small town of about 25 thousand people. Danvers is not the original name. Originally called Salem’s Village, it is the original site of the Salem Witch Hunt. At the top of the hill. known as Hawthorne Hill, sat the Hawthorne family house built in 1646. John Hawthorne was known as the most radical judge of the Salem Witch Hunt. Although disputed, some people believe Hawthorne Hill is the same location as Gallows Hill. The hill obtained its name because this is where they executed the accused witches. 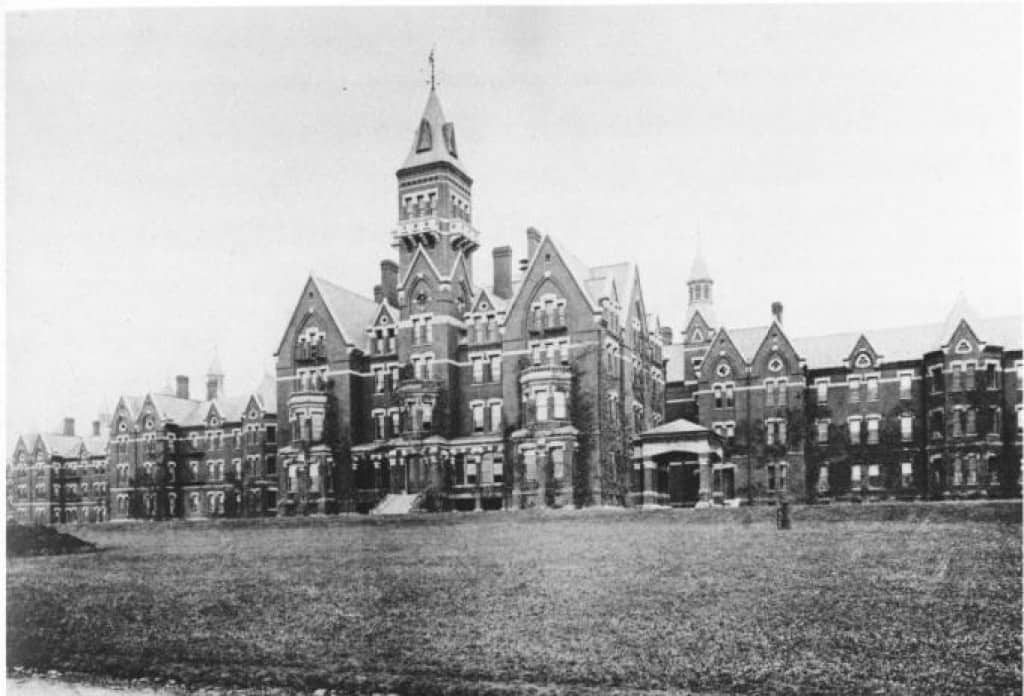 Later, the State Lunatic Hospital of Danvers was built at this exact location in 1878. It would operate for 114 years until 1992. Although built with good intentions and a desire to humanely care for the mentally ill, the hospital became overcrowded and underfunded. This led to radical treatments and control techniques such as lobotomies, sedative forms of hydrotherapy, straight jackets, shock therapies, and medications.

As previously described by visitors to the hospital in the 1940s, individuals would wander the halls aimlessly, or stare at the walls with vacant stares. Sick and dirty Patients sometimes died and not found for days. The hospital remained open until abandoned in 1992. They tore down most of the buildings in 2006 and later turned them into apartments. Today, the most significant remaining part of the State Lunatic Hospital is a cemetery. It contains the remains of hundreds of patients who died at the hospital but left unclaimed. Today, people living at the Danvers site report full-body apparitions, doors that open or shut by themselves, windows that break for no reason at all, ghost attacks, screaming, and strange footsteps.

The Paris Catacombs are a roughly 200-year-old ossuary beneath Paris. These tunnels contain the remains of about six million people, which make them ripe for haunting. Some of the rooms within the catacombs contain the exposed bones of the people laid to rest there. The bones are often decoratively displayed. The Crypt of the Sepulchral Lamp is one example. 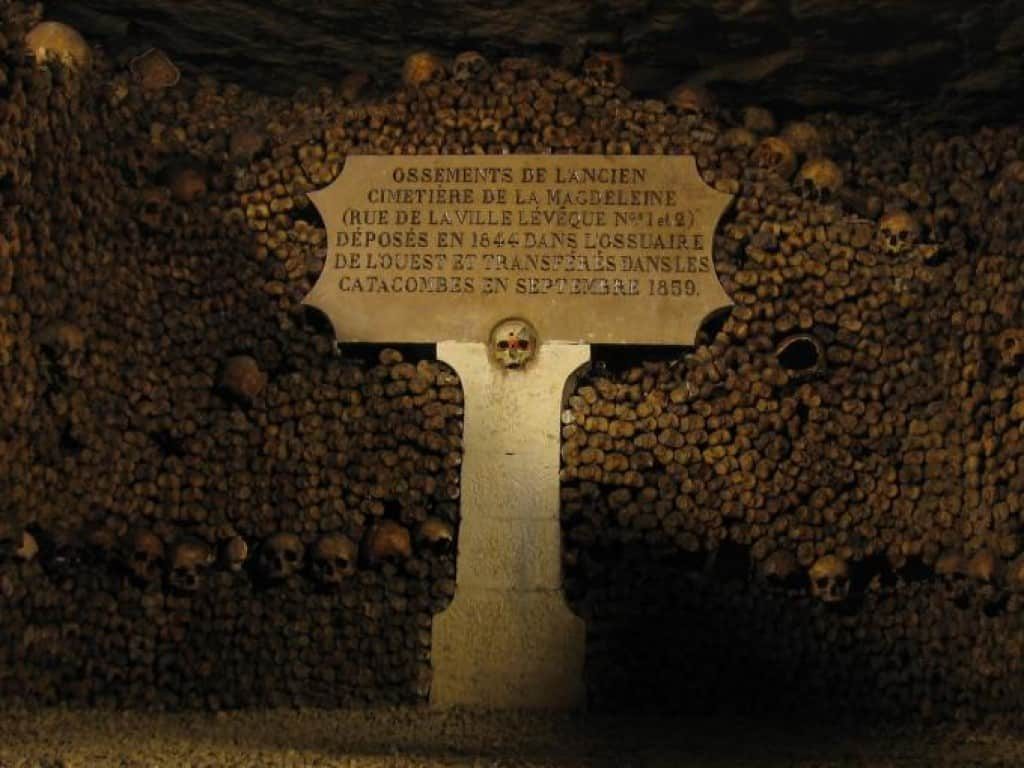 To add insult to injury, these displayed remains are mainly of bodies exhumed from the cemeteries within Paris and brought into the mines below the city thanks to some very poor burial planning on the part of Parisians.

Five Haunted Hospitals with a Dark Past

Christopher William Crawley constructed the Monte Cristo Homestead in 1885. So many tragedies occurred at this residence that it’s officially Australia’s most haunted house. According to Wikipedia, a boy was tragically thrown from the stairs of the homestead and a maid fell off a balcony. In 1961, the Monte Cristo caretaker, Jack Simpson, was murdered. A juvenile who just finished watching the Alfred Hitchcock movie “Psycho” three times shot him. A stable boy also burned to death and a mentally ill man became imprisoned here for many years. 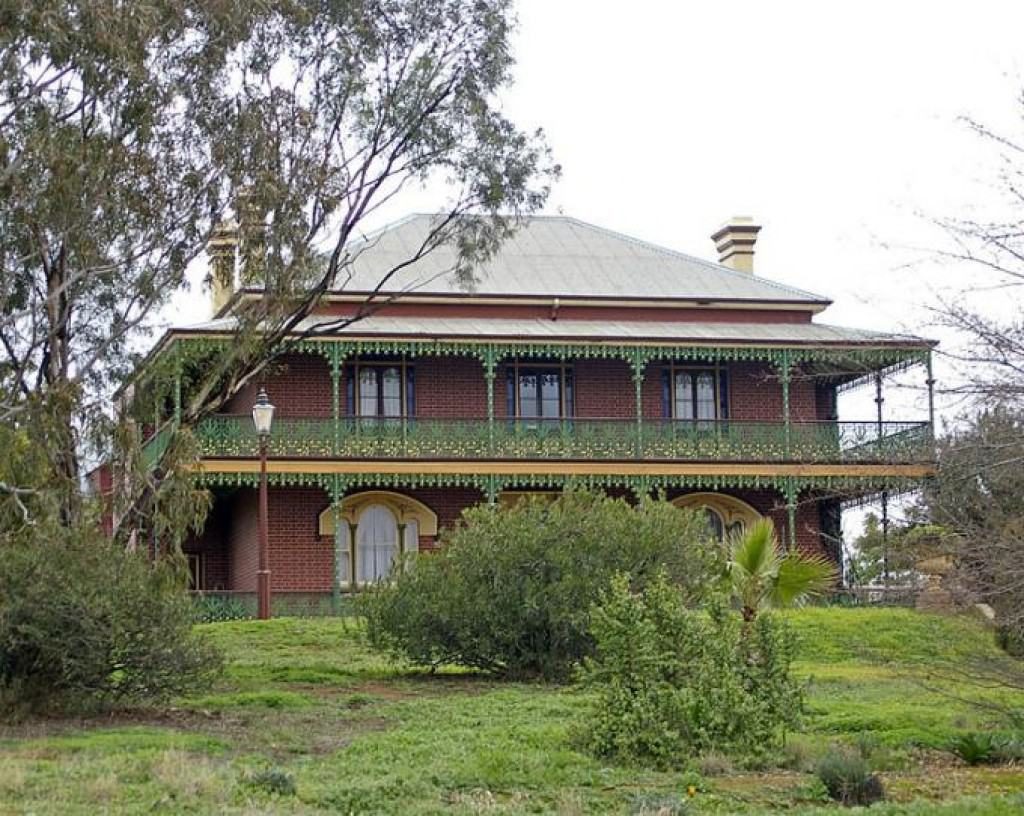 Monte Cristo Homestead in Junee, New South Wales is one of the most haunted places in Australia.

Animal mutilations, mysterious lights, and a feeling of an unseen presence are commonly reported by visitors of the Monte Cristo Homestead. Monte Cristo still stands today, but now operates as a museum and a popular tourist attraction. It is also a widely popular discussion on various ghost and hauntings television shows. Unfortunately, it is impossible to feature all of the most haunted places on earth.

What places do you think should be on this list?