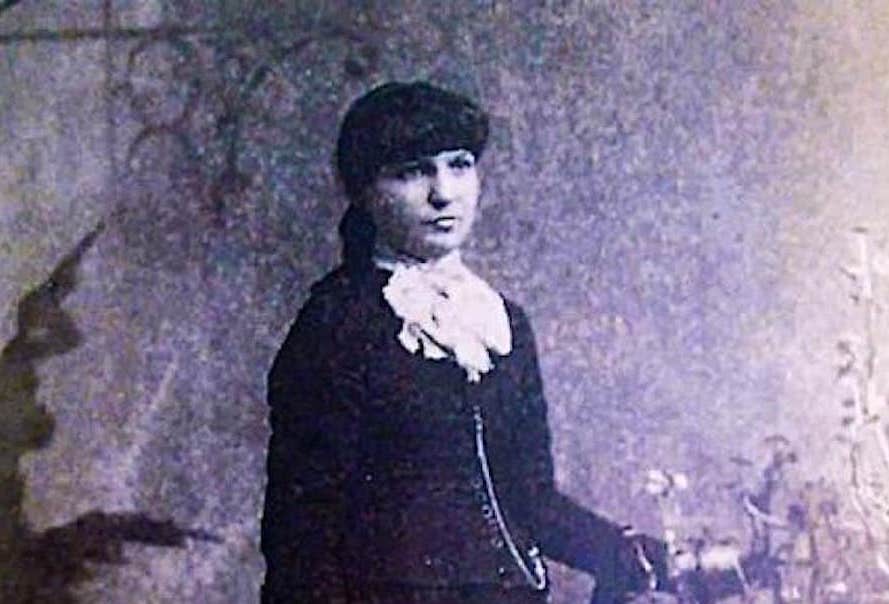 Nobody heard the gunshot. It wasn’t until they found Kate Morgan’s body on the staircase that anyone knew there was a shooting.

Given the limited information and embellishments to the story, it is difficult to decipher what really happened. But let’s dive into what information is available.

Who Was Kate Morgan?

What we know is that Kate Farmer was born around 1864 in Iowa. Kate’s mother died when she was only a toddler, so she lived primarily with her maternal grandfather. In 1885, she married a man named Thomas Morgan, a hustler, and gambler. The marriage to Thomas was evidently an unhappy one, as Kate ran off with another man in 1890. She reunited with Thomas by 1892, and the pair headed west. They traveled together across the country by rail, swindling unsuspecting passengers.

When Kate arrived in Los Angeles in mid-1892, she was alone. Looking for work, Kate found employment as a maid in one of the wealthier households in Los Angeles.

The Case of the Beautiful Stranger

In late November 1892, Kate arrived in San Diego, again solo, and checked in to the Hotel del Coronado under the name of Lottie Bernard. The staff noted Kate looked ill, melancholy, and believed she was waiting for a companion to join her. According to The San Diego Tribune, Kate shared with housekeepers that she was suffering from stomach cancer and heart disease. She told the concerned staff that she was waiting for her brother to take care of her. As far as we know, Kate did not have a brother who was a doctor.

On November 29th, Kate Morgan’s body was discovered on an exterior stairway leading down to the beach. She was in the first trimester of pregnancy. Her gun lay nearby, and a single gunshot to the head ended her life.

They ruled her death a suicide.

Using a pseudonym and false registration made it challenging to ID her body. For months after Kate Morgan’s death, newspapers across the country reported on the suicide of the “beautiful and mysterious stranger.”

After her death, staff had noted there were likely signs of previous suicide attempts. Given that Kate was thought to be suffering from an incurable illness, her strange mannerisms, and that her gun lay next to her dead body, it makes sense that they ruled it a suicide. But, a century later, in 1989, a lawyer named Alan May digging around the official files found that the bullet that killed her was of a different caliber than her own gun.

I now speculated that she did finally meet her companion, and that companion was Tom Morgan. Tom may have been upset about the pregnancy and, in an unfortunate tale as old as time, murdered his wife.

Regardless of this finding, the case remained closed.

Almost as expected, stories of the hotel room she stayed in being haunted circulated — and still do today. Originally, hotel room 312, the number has since changed. Guests in the Hotel del Coronado have reported malfunctioning electrical equipment, unexplained cold spots, and a shadowy phantom patiently waiting in the windows.

It appears that Kate Morgan became quite taken with the fancy hotel and decided not to check out.

The Hotel del Coronado describes the haunted paranormal activity, “Today, Kate’s spirit seems to have remained at The Del, where she tends to occupy and haunt her former guestroom. But her beautiful vision–and ghostly pranks–can be experienced throughout the rambling resort and grounds.”

The hotel published a book on the phenomenon Beautiful Stranger: The Ghost of Kate Morgan and the Hotel del Coronado.