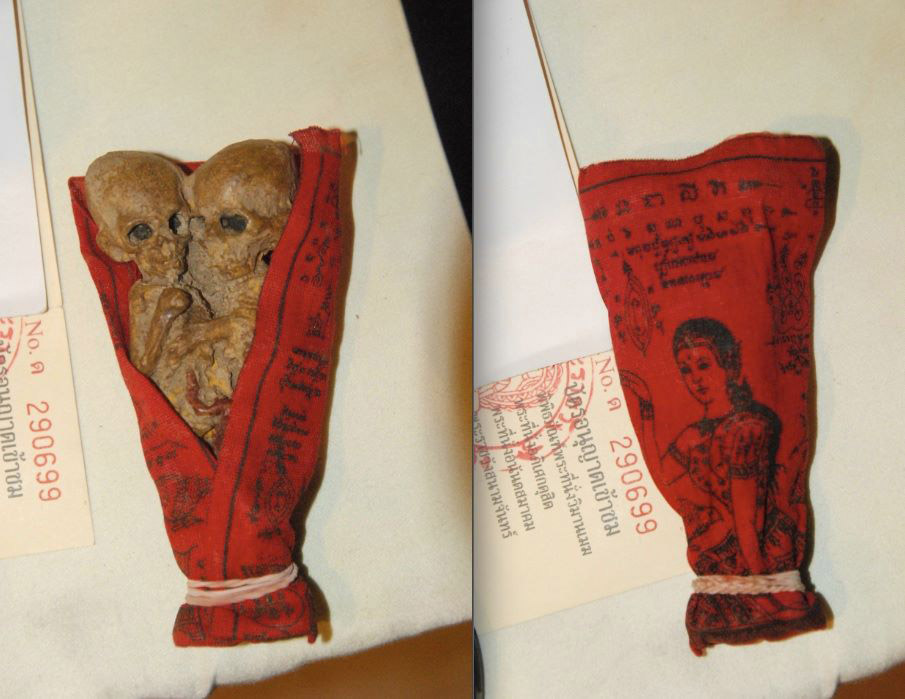 A visit to Southeast Asia will expose the traveler to a plethora of bizarre rituals. Some are quite benign, while others are much more sinister.

The history, religion, and traditions of society dictate local customs, and these rituals are no different. People often think of these rituals as strange, but it is important to keep in mind that these rituals exist within each culture for a reason.

Below, we explore six of these “bizarre” rituals that err on the extreme side of normal—even to the cultures they exist within.

NOTE: The content of this article can be disturbing to some readers. Reader discretion is advised.

In Thailand and Cambodia, there exists a mysterious sect of monks who engage in esoteric rituals. They engage in similar rituals to western sorcerers, planting bad luck or creating curses.

However, their most noteworthy ritual is the summoning of a Child Spirit for the purpose of good luck. Called Kuman Thong in Thailand and Koan Kroach in Cambodia, these spirits originate from stillborn babies. Monks would procure these babies and perform rituals to manifest their powers. To harness the power, the monks will often extract the souls into a doll or mummify the fetuses themselves.

These “babies” would then be sold to opportunists looking for material wealth. Despite how strange it might seem, Child Spirits are an incredibly popular export. Some people across Asia would pay good money to procure a spirit themselves. A Briton was arrested for trying to smuggle six preserved fetuses out of Thailand, with the price for each fetus costing a hefty £4,000 ($5,580). He intended to travel to Taiwan, where he could resell the fetuses for six times its cost.

Though it is hard to ascertain whether these spirits actually bring good luck, many of its proponents claim that their careers have improved dramatically. Legend has it that a Cambodian criminal kept a pair of Child Spirit twins who made him almost invincible. He could evade police capture and embark on daring robberies without so much as a scratch. Hearsay has it that the spirits tipped him off whenever the police were coming or could turn him invisible whenever he wanted to.

The practice of Kuman Thong still exists today. However, mummifying fetuses have been increasingly rare. 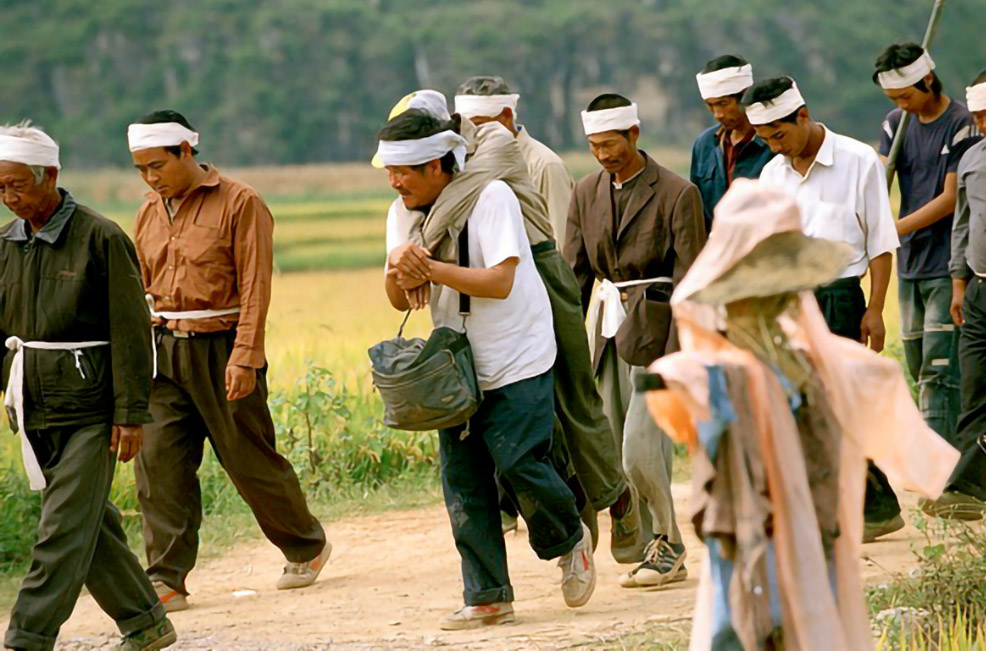 From the Chinese film “Luoye Guigen” which is a dark comedy about a farmer who tries fulfill his friend’s dying wish to return to his home province. The protagonist must corpse walk the body of his friend home.

Corpse walking is a famous Taoist practice that has prevailed in Cantonese cinema since the dawn of time. Ask any Chinese millennial, and they will likely describe hopping zombie corpses and Taoist exorcists.

Corpse walking, however, has legitimate merits. According to ancient texts, family members who died outside of their home province required transportation back because they could turn into malevolent spirits. Hence, Taoist priests offered to “corpse walk” the bodies back home.

This is where legitimate practices and legends start to blur. Many grandparents of grandparents (we’re talking 1900s here) claim that they saw actual corpses walk.

A Taoist priest leads the corpses with bangs on a gong to create a cadence for the corpses to follow. These corpses would pass villages or towns in the dead of night. Sightings of such parties seem to continue until the cultural revolution, where the Communist party was cracking down on esoteric practices.

From the documentary “Discover China,” many elderly had observed actual corpses walking first-hand. One even recounted how they watched a party of corpses walk through their village at night. Another claimed that they even saw corpses walking during the WW2 era!

However, it is widely believed that the Taoist priests actually carry the corpses. In one instance, two soldiers stopped a corpse walking party and investigated them out of suspicion. In reality, the group was alive—they were just carrying corpses under their huge Taoist gowns. Party members would take turns with priests who were “leading” or “escorting” the party. 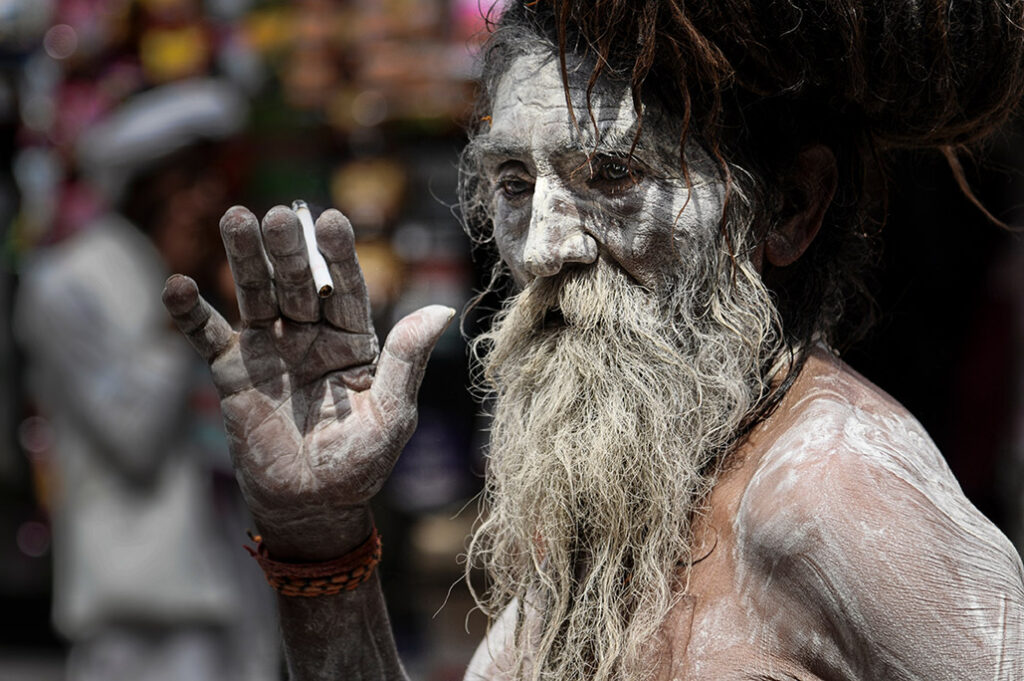 The Aghoris are more of a sect rather than a ritual; however, they are infamous for their notoriously morbid practices. Their philosophy centers around challenging the societal boundaries of humanity, often attempting to achieve “primordialism” through taboo activities.

It is a daily practice for Aghoris to bathe themselves with actual human ash. As most Hindus are cremated, this is not exactly hard to find. However, occasionally, families would leave dead bodies on the Ganges river because they could not afford so. The Aghori would then perform a ritual called Shav Putra. In this ritual, the Aghori would meditate upon the body, chop its head off and maintain the skulls. Some Aghori would even eat the bodies. However, Aghoris themselves do not engage in murder.

Additionally, Aghoris are known to eat excrements and drink urine as well. Their extreme rituals go beyond the lens of cultural norms. Hindus shun them away as they believe that Aghoris can cast powerful dark spells. While Hindu people ignore or avoid coming into contact with any Aghoris, those who cannot be healed from Western medicine will seek them out. Aghoris are a last resort to “transfer” their health problems away.

Many tourists seek out Aghoris for their wisdom and eccentric practices. 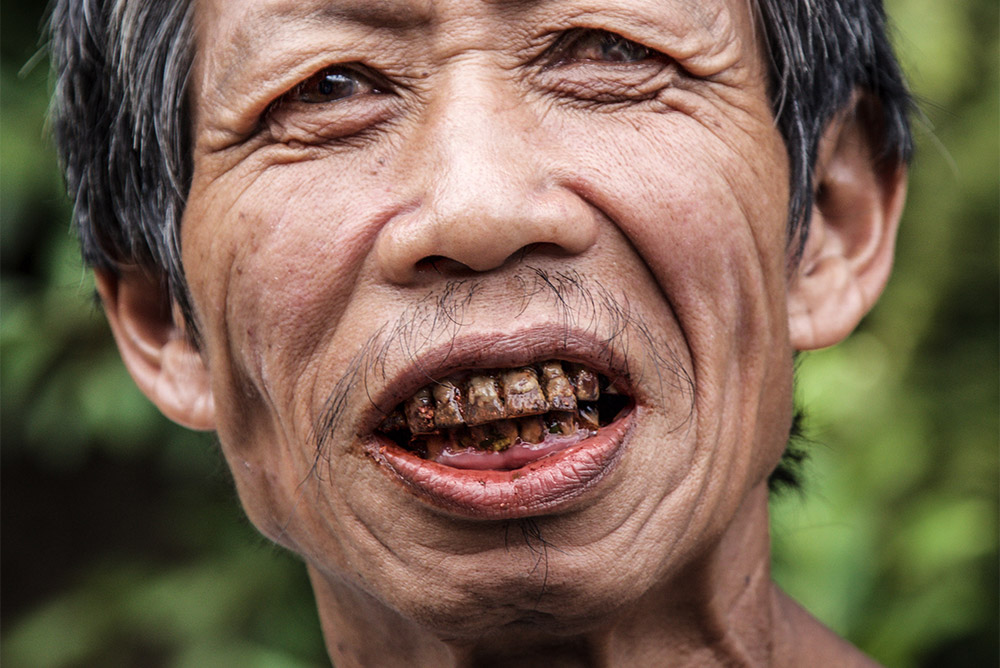 A (living) man of the Mangyan tribe of the Philippines.

The ritual of Kutkot involves exhuming the graves of loved ones and dressing them up in clothes and jewelry. Originating from the Mangyan tribe of the Philippines, families often unearth (the literal meaning of Kutkot) their dead after one year of burial. They would then dress them in clothing and jewelry. The family would then dine, live, and sleep with them for a year.

Afterward, families would then say goodbye to their deceased loved ones by performing Sinakot. This process involves cleaning the bones and wrapping the bodies with a cloth to make them resemble a mannequin. Once done, the bodies are then interred at a nearby cave.

Many Filipinos have an unfavorable view towards this practice, partly due to their strong Catholic influence. Hence, the tradition is slowly dying as youngsters refuse to partake. With many moving to the city for better prospects, these traditions—and complicated rituals—are abandoned in favor of more straightforward burial practices.

Admittedly, this is a sad thing to see. 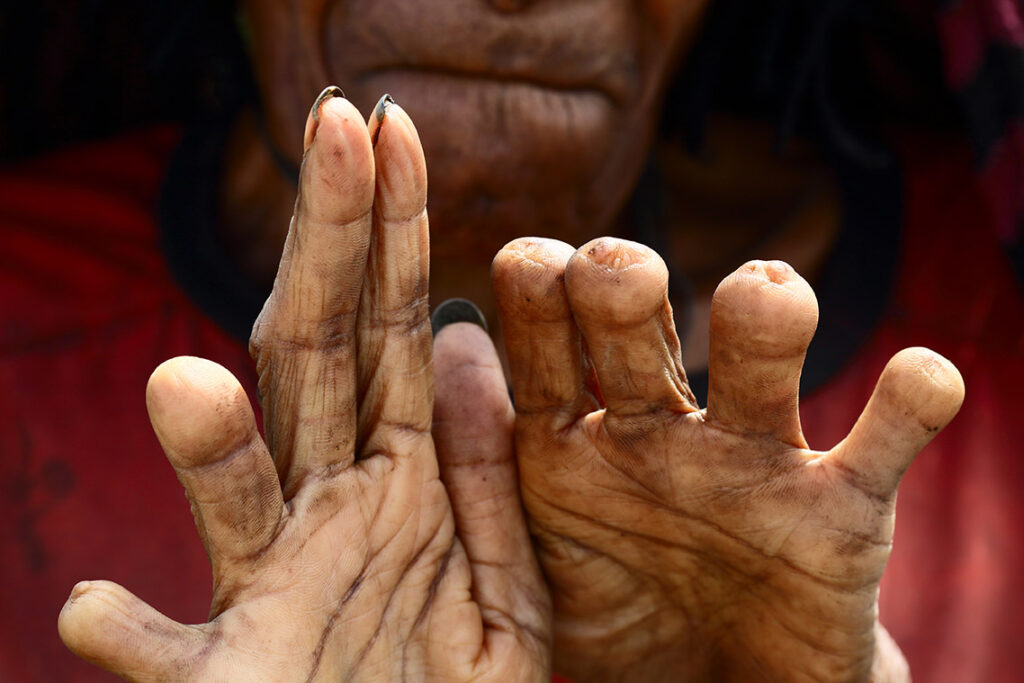 Woman of the Dani people in Papua New Guinea with her fingers cut off at the knuckle.

Finger cutting is a practice adopted by the Dani people of Papua New Guinea. Practiced only by Women, they cut their fingers off upon the death of a loved one. Finger cutting is done to ward off their lingering spirits, as well as to express their sorrows physically.

They made the finger removal process as painless as possible (still, too graphic to describe). Once removed, the fingers are cremated and buried nearby.

There are still uncontacted tribes within Papua New Guinea that likely practice similar rituals. Another extreme practice once adopted by the Fore tribe in New Guinea was the consumption of the dead’s body. Particularly the brain. This practice caused a disease called “Kuru,” or Prion disease. Eventually, the practice stopped in the early 2000s.

The inhabitants of New Guinea are still a mystery to researchers. Even with discovered tribes, their customs and behaviors are not well understood. The country’s lawlessness and constant unrest do not benefit anthropologists either. 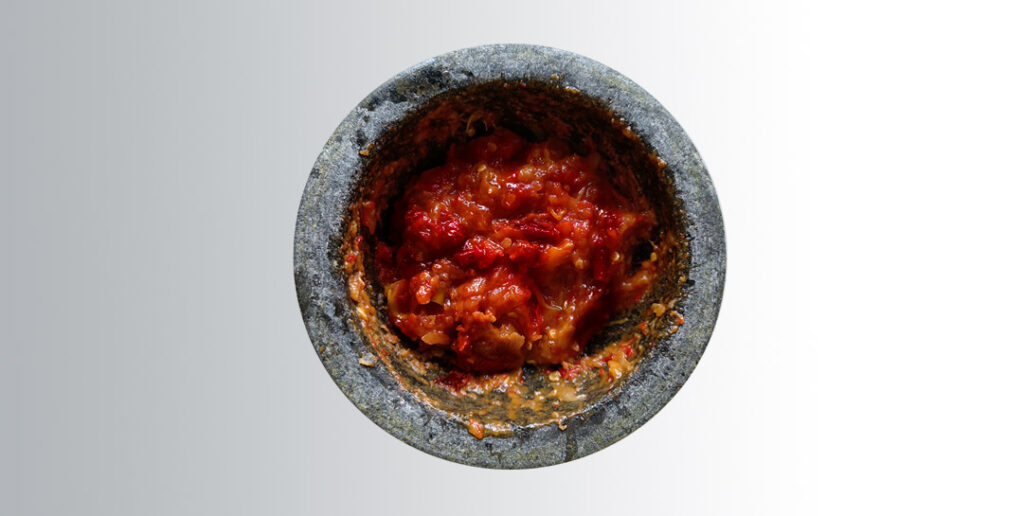 This is just regular spicy sauce. But can you imagine if it contained menstrual blood?

Nasi Kang Kang is a Malay love spell that seeks to infatuate bachelors. There are many variants of this ritual. However, the crux of it all is still menstrual blood. Essentially, this ritual entails mixing menstrual blood with rice and then serving it to the victim.

Yes, this is real.

A domestic helper in Singapore did this exact thing (mixed with additional disgusting ingredients for dinner) to improve relations with her employers. She was discovered and charged. A Malay film highly popularized this practice, with the premise of infatuating a man.

Another variation of this ritual involves rubbing menstrual blood on frogs or creating a love potion that can be drunk by the victim. The differences between each practice are regional and dependent on the witch doctor.

However, cases are not that common. Despite being a strict Islamic society, occasional esoteric practices still persist in Malaysia and, similarly, in Indonesia.

With this bonus example, we’ll end on a more lighthearted and less macabre ritual. As part of the MH370 search effort, the Malaysian government hired a bomoh (Medicine man of sorts) to ritualistically determine where the missing aircraft is… On live television. Below you can see a video.

I share this not to mock their customs but to show how traditional Southeast Asia is. Despite the gleaming skyscrapers of Singapore, the digital nomad paradise of Chiang Mai, and the digital savvy of Manila, their cultural beliefs are still rooted in ancient tradition. Cultural identity is not universal, despite our globalization efforts.

What did you find the most bizarre or disturbing? Drop us a comment and let us know! These practices might seem strange and downright heretical to some, but we must remember that our perspective is neither right nor wrong. So is theirs!

Coming from a funeral service in Singapore, we also struggle to preserve our funeral traditions, much like the people from the Mangyan tribe. However, our struggles are made much easier as our rituals are not as time-consuming.

Nicholas and his father operate a family-owned funeral service in Singapore. He wishes to preserve the rich traditions and practices of funeral rites by documenting them online.