Ghosts of the Theatre Royal of Drury Lane 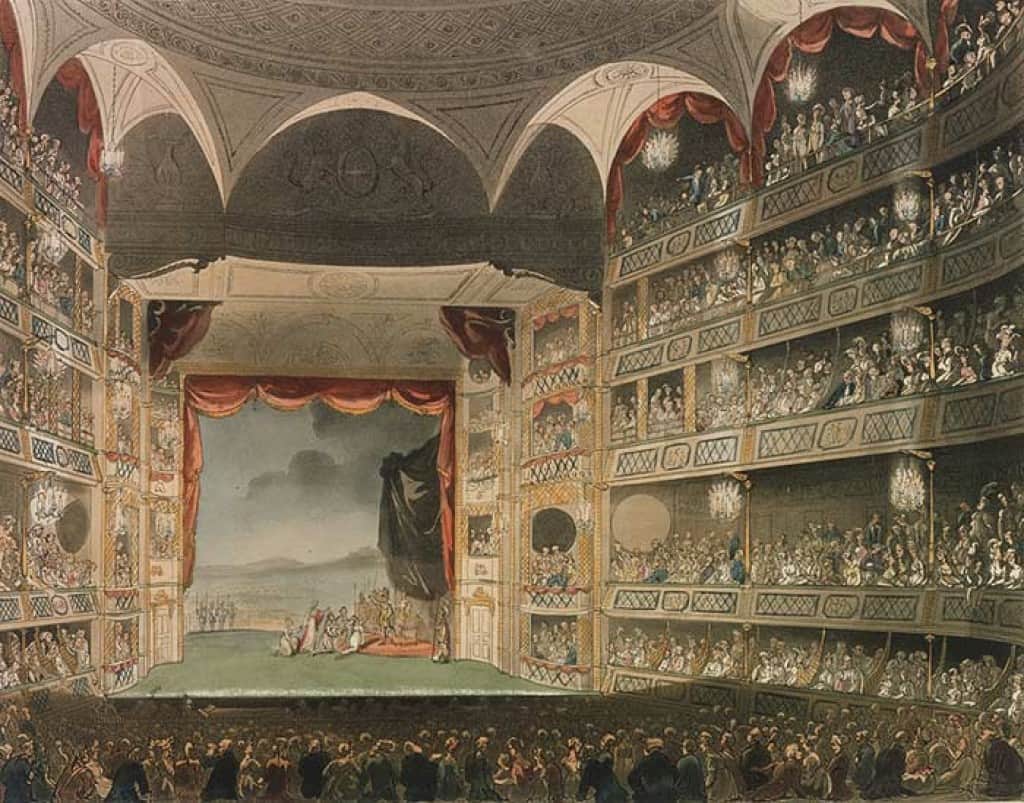 Sketch of the Theatre Royal of Drury Lane in 1808.

Stage actors are a superstitious lot. In pursuit of a good performance, there are play titles that cannot be mentioned, rituals to be performed before each show, and the bizarre “break a leg” phrase used to wish an actor good luck. It is not a surprise, then, to learn that some theaters have the reputation of being very haunted. One of the theaters with many claims of ghostly visitations is the Theatre Royal of Drury Lane, London.

History of the Theatre Royal of Drury Lane

The theater itself boasts a noble history. Theaters have stood on this same spot since 1663. Over the centuries countless plays and musicals have been performed at the Theatre Royal, and innumerable actors and actresses have appeared onstage there.

But it seems that some of those performers have decided to stick around — despite the fact that they died some years ago.

First off, the ghost of an actor named Charles Macklin (1699 – 1797) is known to present himself to living actors at the theater. As with many tales of ghosts, Macklin’s hauntings revolve around a murder. In 1735, Macklin quarreled with a fellow actor over the ownership of a wig. The argument escalated until Macklin shoved his cane through the eye of the other actor, killing him instantly. What is somewhat peculiar about this story is that, unlike many other tales of ghosts of murdered men and women haunting the site of their death, in this case, it is the murderer and not the murdered who roams the theater’s halls.

The ghost of stage clown Joseph Grimaldi (1778 – 1837) has also been spotted within the Theatre numerous times. His ghost is a beneficial one, and several nervous actors and actresses have felt his invisible but calming presence as they felt themselves being guided around the stage during their performances.

The most prominent ghost in the theater, however, is anonymous. Over the past decades, many performers and backstage staff have seen a man gliding through the halls of the theater. This “Man in Grey,” as he has been dubbed, is described as wearing the clothing of a respectable gentleman of the 18th century. He may have once been an actor or an audience member or possibly even one of the theater’s owners/managers. In 1848, during some renovations to the theater, a wall was removed and workmen found behind it the remains of a man with a knife protruding from his skeleton. Many believe these are the earthly remains of the Man in Grey, but if so, it has neither revealed his identity nor stopped his ghost from continuing to walk about inside the theater.

Other spectral visitations, including one of the ghost of King Charles II, have allegedly been spotted over time within the theater.

The Theatre Royal is currently the host of “Shrek, The Musical.” It is not publicly known if any ghosts have been seen amongst the ogres on stage.