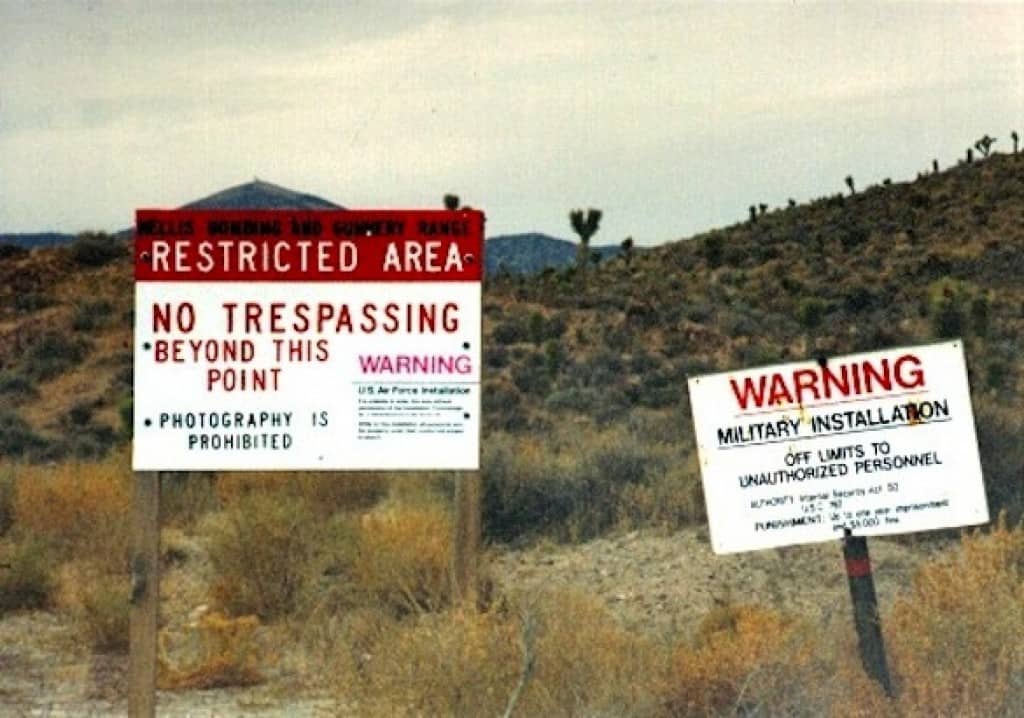 The Secrecy of Area 51

Area 51 is the most secretive military base on Earth – so secretive that you won’t find it on the United States Geological Survey maps, and its airport isn’t listed on any aeronautical maps either, even though flights to this location leave Las Vegas’ McCarran Airport every day.  The base is hidden from snooping eyes by the mountain ranges of the Emigrant Valley and the Nevada Test Site and is protected by almost a thousand miles of restricted airspace.

Area 51, is also known as Dreamland, Paradise Ranch, Home Base, Watertown Strip, Groom Lake, and most recently Homey Airport. Much of the interest in Area 51 comes from members of the UFO subculture who are convinced that crashed alien spacecraft, alien technology, living alien specimens, as well as the bodies of aliens are stored in warehouses built beneath the base, complete with underground tunnels.  It didn’t help things when the state of Nevada named a barren, 98-mile stretch of Route 375, which runs close to Area 51, the “Extraterrestrial Highway.”

Perhaps this is what government officials want us to believe, to throw us off track from finding out what’s really going on at this military base?

The enormous steps the government has taken to keep the fact that this military base even exists, the warning signs to “Keep Out or Risk Use of Deadly Force,” and “All Photography Prohibited,” makes you want to keep looking.   An impossible feat with armed security guards patrolling the perimeter and helicopters standing by, ready to attack should an intrusion be made into the restricted airspace.

Air Force pilots training at nearby Nellis Air Force Base are carefully briefed that flying over one particular area known as R-4808, would result in detrimental consequences and an automatic Article 15, which includes an administrative reprimand, a demotion, and loss of pay.

If it is not Aliens, Then What?

If the government is not storing aliens’ or their spacecraft there, why all the secrecy?

Is all the secrecy based on the fact that the site is used for testing of new military equipment? Whatever is going on at Area 51 is truly a mystery at this juncture.

Despite repeated denials by the government that a secret military facility existed,  many observer’s saw people being shuttled in and out of Las Vegas’ McCarran Airport every day from a private terminal used solely by defense contractor EG&G.  White Boeing 737’s marked only with a red stripe going down the body and its identifying tail number reportedly operate a daily shuttle service to and from federally controlled areas such as Area 51.

Today, many people believe that the most evil aspect of Area 51 is not what could be possibly happening with aliens, but what is being done to its employees’.  Jonathan Turley, an attorney representing Area 51 employees, states that in many ways the government welcomes the UFO hysteria because it covers up what is going on there.

The death of a sheet metal worker in 1989 caused by toxic poisoning from unknown chemicals he handled on base bought fear to fellow employees.  His skin peeled off his face and blisters developed over his entire body.  His doctors told him that in order to treat it, the exact toxins would have to be known.  Supervisors at the facility refused to disclose that information to him, and he died soon after. Meanwhile, other employees’ were developing the same symptoms.  Afraid that they were also exposed to these poisonous chemicals and would soon die too, they contacted an attorney and a class-action lawsuit was filed by attorney Jonathan Turley.  A Presidential Determination 95-45, exempting the location from all federal environmental law, was signed into effect.

On February 2, 1951, the Atomic Energy Commission detonated an atom bomb in a desolate area, newly re-named the Nellis Test Site (NTS), 30 miles southwest of Groom Lake. Maps drawn at this time show the NTS divided into randomly numbered areas.  The area in the northwest corner near Groom Lake is noted as Area 51. 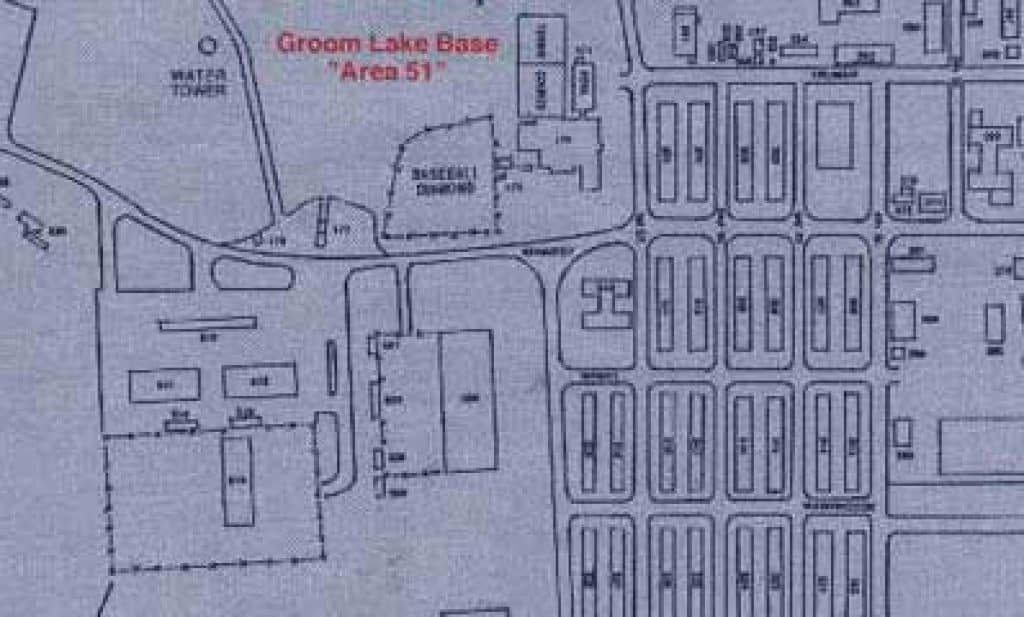 The layout of area 51. Photo courtesy of Glenn Campbell

A Testing Site for State- of -the Art Aircraft and Base for Spy Missions?

The invention of the U-2 spy plane, a plane capable of flying at an amazing 70,000 feet, above the reach of USSR radar was one of the aircraft tested there.  To conceal the base activities, a press release was issued stating that as far as the government was concerned, Area 51, and any employees, did not exist.  On August 19, 1955, Executive Order 10633 was signed into effect by President Eisenhower, restricting the airspace above Groom Lake and making it illegal for any vehicle to cross through or get too close to the restricted airspace.  Then on June 20, 1958, Public Land order 1662 was signed into effect, making 60 square miles around Groom Lake officially non- existent.  However, it was soon determined that further precautions would be necessary to fully conceal the activities and the U-2. On June 20, 1958, Public Land Order 1662 was signed into effect.

Unfortunately, all of this did not prevent the Soviets from learning of the plane that was built and designed to secretly spy on their military. On May 1, 1960, U-2 pilot Francis Gary Powers was shot down over the Soviet Union. President Eisenhower denied that this was a spy mission and that the American people had been left in the dark.  However, it soon became clear that both accusations were true.

Implementation of the “Black Budget” by the government?

In essence, a secret pool of taxpayer’s dollars. Funds were largely ‘uncontrolled” and researchers estimate $30 billion dollars a year, or two-thirds of the budget had been spent trying to keep its projects secret.  This included background checks of employee’s, transportation, security, and surveillance of the employee’s that worked there.

From the start, everything has been a “cloak-and-dagger ” clandestine operation.

John Pike directs GlobalSecurity.org, a Beltway think tank, and has carefully observed the Pentagon for 25 years.  He says that during the Reagan years, analysts could figure out – in broad terms – what the key classified projects were, despite all the secrecy.

In 1990, he notes, a New York Times reporter wrote a 273-page book on the “Black Budget,” money funneled into clandestine military and spy programs with little congressional oversight.

We may never know exactly what goes on inside of Area 51. In fact, there was a time when it was believed that Area 51 was moved to Area 6413. However, according to an anonymous source in Washington D.C., it would cost $5 billion dollars to move the facility and such an operation would be unthinkable.

But whether or not you believe the government is continuing to keep what goes on at Area 51 a big secret and perhaps they have moved base operations to Area 6413,  consider this…..64 minus 13 equals 51.

Madeleine Noa is a freelance writer from Honolulu, Hawaii who has published articles on a wide range of topics including spas, real estate development in Hawaii, entertainment, luxury yachts, and history. She is also a copywriter and creates sales collateral for small businesses and corporations.She has been an associate writer for "IN" Magazine and "Second City" Magazine, having been published 13 times between the two publications.