Reincarnation: Are the Pollock Twins Proof of Rebirth or a Hoax?

In 1957, two daughters were killed in a car accident. Were they "reincarnated" the next year? 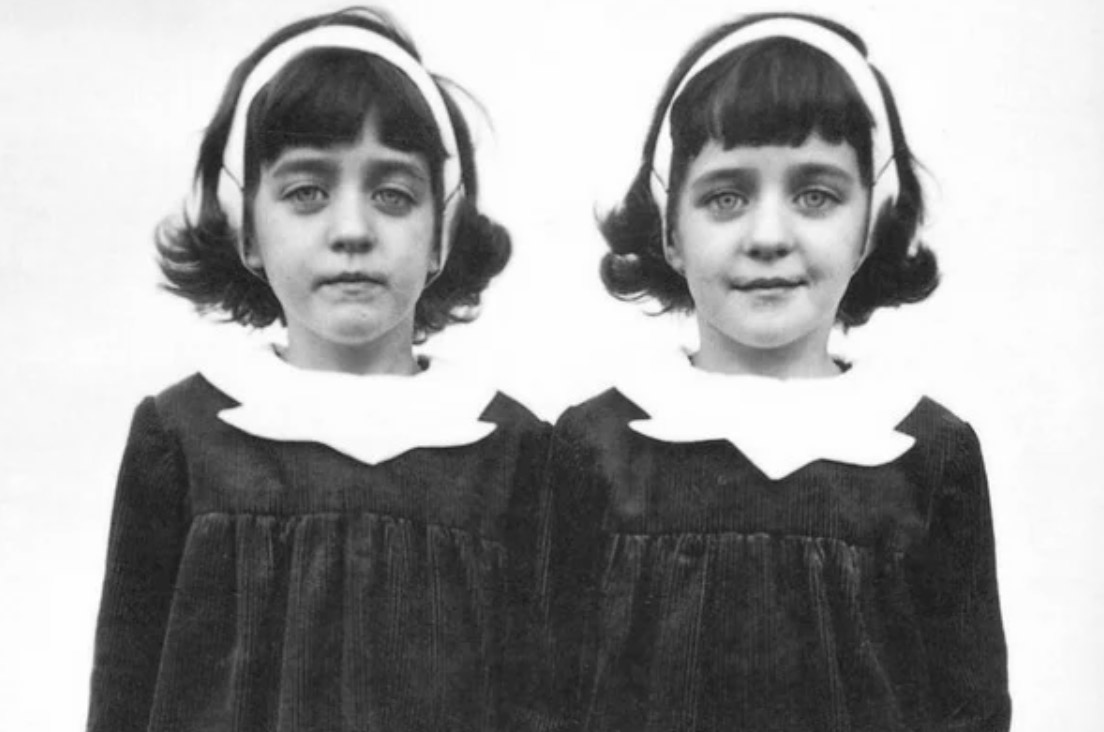 Did the pollock twins have a special connection to their deceased sisters?

The mysterious history of the Pollock twins has been used often as evidence of reincarnation. Two daughters tragically killed in a car accident, then just one year later, twin girls are born. The Pollock twins had an eerie resemblance and strange familiarity with their deceased sisters’ lives.

On May 5th, 1957, two sisters and a friend walked along a road in Hexham, England, when a car deliberately mounted the sidewalk and killed them. The driver was intoxicated and suicidal. John and Florence Pollock’s two daughters Joanna 11, and Jacqueline, 6, were killed on impact. Their friend died in transit to the hospital.

The family fell in deep grief.

The Pollock Family, which had consisted of four boys and two girls before the girls’ death, held strong religious beliefs. John converted into Catholicism in his late teens from the Church of England. In contrast, Florence had grown up as a Salvation Army Christian Church member and only converted to Catholicism before her marriage. John felt there was a divine purpose for his daughter’s death. While John Pollock was religious, he also had unique interests not typically held by Christians. He became fascinated by spiritualism, the occult, and reincarnation at an early age. After the tragedy, they prayed to God, seeking comfort and, in John’s case, asking God to return his daughters to him.

The couple was blessed with a new pregnancy the following year. Neither John nor Florence had twins in their family history, but John was convinced the pregnancy would result in a set of twins. The Pollock’s doctor was confident they would be having a single birth because they only detected a single fetal heartbeat. But this did not deter John’s fixation on having twins. Having twins in a scenario like this, while not rare is uncommon, but what came next seems more than a coincidence.

Florence gave birth to identical twin girls on October 4th, 1958, named Gillian and Jennifer. John Pollock, a firm believer of reincarnation, was stunned by Jennifer’s birthmarks—thinking his prayers had been answered. 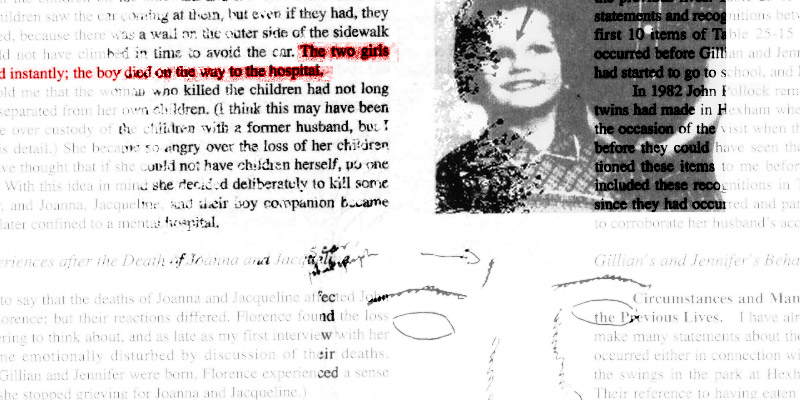 Dr. Stevenson’s notes the location of the scar on Jacqueline Pollock.

Jennifer was born with a unique birthmark, a thin white line on her forehead. When her deceased sister Jacqueline was three, she fell on a bucket which left her a forehead scar above her right eye. Jennifer’s birthmark was in the exact location and resembled Jacqueline’s scar. Florence remained skeptical, but she noticed that Jennifer had a second birthmark on her waist that was eerily like one Jacqueline had in the same location.

The family moved away when the twins were infants but moved back to Hexham three years later. The Pollock twins seemed oddly familiar with a place they had never known. They pointed out locations that had been of interest to their sisters before them. As the family walked along, their parents listened to their discussions. “The schools just around the corner,” said one of the Pollock twins, even though the school their deceased sisters had attended was still visibly hidden by the church. “That’s where we used to play in the playground,” said the other.

Read more: The Life of Omm Sety: Her Mysterious Identity and Reincarnation

In another strange experience, the sisters discovered their dead sisters’ toys and John claims they identified the dolls by name. Florence Pollock claimed that she overheard the Pollock twins discussing the details of the accident while during play. She found Gillian holding Jennifer’s head during one time, saying, “The blood’s coming out of your eyes. That’s where the car hit you.”

The Pollock twins became increasingly upset and expressed panic when around cars and other vehicles. For example, Florence indicated that both Jennifer and Gillian seemed more cautious around cars than other children in the family or that she had seen. The twins would keep close and grasp for their mother’s hand at the sight of a car. Skeptical, Florence Pollock figured this was due to her own cautiousness after the previous tragedy. In another memory, John Pollock described rushing to find his twins after hearing hysterical screaming. He found the cowering twins hugging after becoming frightened when a car started up.

The strange coincidences seem to fade by the time the twins turned five, but their story attracted the attention of Dr. Ian Stevenson, a child psychologist. Stevenson learned of the case of the Pollock twins following the widespread news reports in the spring of 1963. He interviewed the family many times over the years and continued to interview Jennifer and Gillian after Florence and John passed away.

He became the founder of the Division of Perceptual Studies in 1967 at the University of Virginia. The goal of the department was to research and investigate phenomena that are not able to be explained with current scientific theories. The paranormal phenomenon covered types of extrasensory perception (such as telepathy), ghostly visions, after-death communications, poltergeists, near-death experiences (NDEs), out-of-body experiences (OBEs), and children’s memories of previous lives.

Dr. Stevenson wrote several books, including Children Who Remember Previous Lives: A Question of Reincarnation (1987). In this book, Dr. Stevenson believes children are the key to learning more about reincarnation. He describes the cases of 14 children which he believes points to evidence of reincarnation. He documents the cases and details instances where the children rediscover their past lives, including the Pollock twins.

He writes, “Although reports of such claims [of reincarnation] are rare, there are some. The person making them is almost always a young child, from whose mind these memories fade after some years.”

Reincarnation is a belief more strongly held in South and East Asian countries because the idea of a cyclical life is built into many of the non-Christian religions. Hinduism and Buddhism both put significant importance on karma. Through rebirth and karma, these religions believe in the law of cause and effect. Believing what one does in a previous life will affect the next life.

I was unable to find reports within Dr. Stevenson’s work about the influence the elder siblings played on the memories and stories of the twins. Dr. Stevenson did note during recorded remarks, part of the research done was verifying the statements did not arrive to the children by other sources. Given John Pollock’s strong belief in reincarnation, there is a possibility of a bit of a self-fulfilling prophecy at play here. But, without a doubt, the story of the Pollock twins is a curious look into reincarnation and the influence our past lives may play.