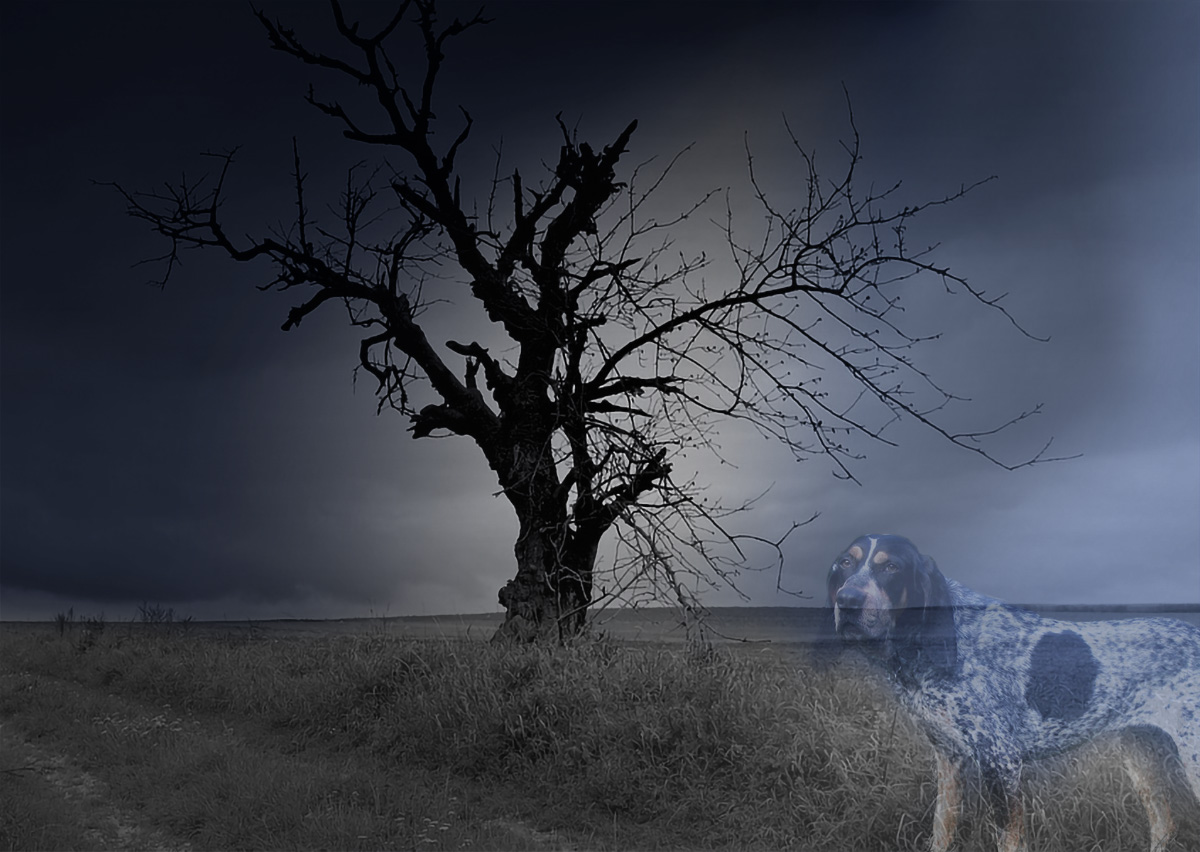 What is the Tale of the Blue Dog?

On a frigid February night, outside Port Tobacco, Maryland on Rose Hill Road, the legend was born.

Charles Thomas Sims and his dog were murdered.

Legend has it that Sims and his dog, a Bluetick Coonhound, headed into a tavern. Sims sat warming up by the fire with a drink in his hand. The traveler began to make conversation with those around him about his good fortune. Sims, a soldier, had recently acquired a bit of gold and property.

After drinking late into the night, he became reckless and revealed a little too much. Some less-than-savory listeners believed that Sims was carrying the gold and the deed with him.

Henry Hanos was at the bar that night, eyeing Sims and his pocket full of riches. Eager to get his hands on the deed, Hanos and his pals followed shortly after Sims left the tavern that night. Once they were clear, Hanos and his companions pounced. Sims and his loyal companion fought to the end, but they met their demise along Rose Hill road. Found the next morning were the bodies of Sims and his dog, lying lifeless next to a blood-smeared boulder.

Now, here’s where details get a little fuzzy. In most instances of the tale, it’s said that Hanos buried the riches under a holly tree before fleeing the scene. In another variant, Sims cautiously buried the treasure before going to the tavern. What we do know is that Hanos was unable to get the treasure the night of the murder.

Days later, Hanos returned to the holly tree to retrieve the treasure. The horrid howl of the ghostly blue dog greeted him when he arrived. The blue dog charged and the terrified Hanos fled, leaving the gold and the eerie howls behind him.

If that wasn’t enough, not long after the incident Hanos reportedly fell ill and died a short time later.

In most versions of this folktale, the events take place after the American Revolution. Ed Okonowicz, the author of Haunted Maryland, says that the lore has changed over the years. Based on a report found in the Baltimore American newspaper, the tale goes back earlier to 1658.

America’s first president may have heard the blue dog’s haunted howls. The book, Ghostly Animals of America says, the blue dog’s howls can be heard at Rose Hill—the home of George Washington’s physician.

The legend of the blue dog is still told to many children in the area. There are even claimed sightings of the blue dog, most recently in the 1970s. In Port Tobacco, you’ll also find The Blue Dog saloon, which is a family-friendly restaurant. Inside the restaurant, you’ll find the infamous blue dog in a large oil painting along with a framed version of the tale.