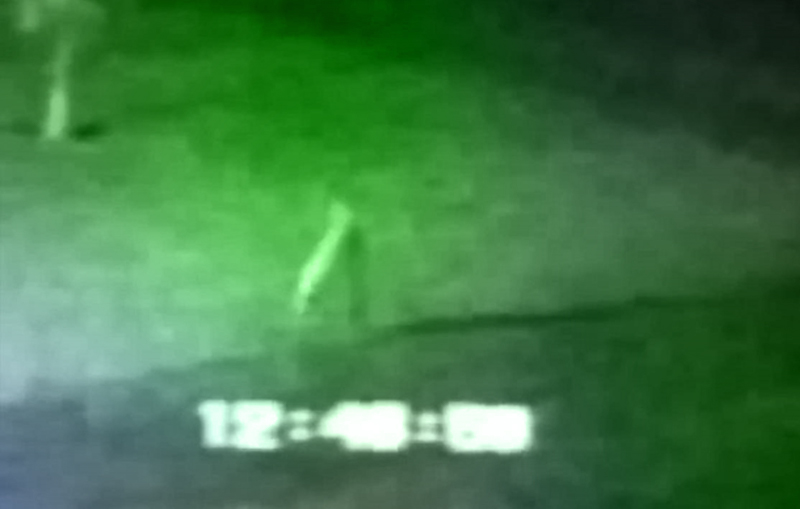 The Fresno Nightcrawler walks and is caught on video.

Fresno, California, is the last place you would expect anything crazy to go on. It’s one of the quietest counties in the country. The Fresno Nightcrawler, also known as the Fresno alien or Fresno nightwalker, is a creature that was originally spotted on camera in 2007. The creature has since been spotted in other regions of the world.

Part of the craze surrounding the Fresno Nightcrawler is its creepy and off-setting appearance. Creatures are anywhere from a few feet to 1.5 meters tall. The Nightcrawler is almost all legs with a small upper body and walked like an insect. It appears to have long legs, no visible face, no visible hands, and a tiny upper body under what looks like a cape.

The first recorded instance of the Fresno Nightcrawler happened on November 5th, 2007.

Paranorms recently spoke with paranormal investigator Victor Camacho, who was one of the first to review the footage. Victor Camacho is the host of the popular radio show “Los Desvelados” (the sleepless ones), which airs in both the US and Mexico and discusses everything from aliens to urban legends like the Chupacabra. Camacho gave us a brief overview of the Fresno Nightcrawler story, much of which can also be watched in the video from his Mutual UFO Network talk, but we’ve added additional details from our conversation.

The main witness preferred to be called to by his first name, Jose. Prior to the fateful day, Jose had installed a secondhand CCTV surveillance system at his family home because of past bicycle theft. He installed two cameras, one in the driveway and one near the front door. This older surveillance camera recorded directly to a VHS tape system. The connected monitor was placed directly next to Jose’s bed.

That night Jose was in his home when he heard his dog barking at something in the front yard. He thought it sounded unusual, so he looked over to the monitor—watching the security footage, he was shocked. He watched two strange beings—nightcrawlers—cross his front yard. Perplexed, he rushed through the house to find his brother sleeping in a nearby room. He quickly explained what he saw and asked his brother to come and check it out.

Jose’s brother opened the front curtains and looked outside but didn’t see anything of note. So, they woke up the rest of the family to review the footage. The unfortunate thing about this surveillance system was that if the video were rewound, the footage would be overwritten on playback. Knowing this, Jose pulled out his video camera to record the rare footage off the monitor.

The family was stunned.

Camacho says, “His brother went outside that night, he didn’t see anything but one part of their yard had tiles, and he saw footprints, small footprints.” After that night, Jose was living in fear, and for two weeks after the incident, he refused to leave his home.

Shortly after that, Jose’s family contacted the local station for the Spanish television network, Univision, searching for some answers. With the original footage lost, the only remaining video is what Jose recorded off his monitor. It is of extremely low video quality, pixelated and compressed.

Camacho recalled the experience stating that in December 2007, he was called by a Univision reporter saying they had amazing video footage that they wanted him to see. Based in Los Angeles, it took Camacho a couple of days to get out to the station in Fresno. Initially, Univision pushed for a definitive statement of an alien sighting, but Camacho countered, saying he needed to get all the facts and talk to the main witness Jose. The reporter reached out to Jose and asked him to speak with Camacho about the experience, but it was difficult because Jose was frightened.

Jose was finally convinced to come down to the television station. During the short interview with Camacho, Jose was visibly shaken and uncomfortable. He refused to show his face on camera, and he appeared very worried to Camacho. After the interview, Camacho left with little more than the story. He didn’t have access to the original footage or any contact information for Jose.

A few months later, in February of 2008, Jose reached out to Camacho, inviting him to his house. Given how much time had passed, all evidence was gone, but Camacho got a better estimate of the size of the Nightcrawler. He interviewed Jose, his brother, and the rest of the family that viewed the video. Camacho also reached out to the neighbors, but none remembered anything from the night in question.

Later, Camacho and another team tried to recreate the footage using the original surveillance system, thinking perhaps someone was messing with Jose or his family. Camacho says nothing could compare to the original footage. He emphasizes, “For me, the video is real. Jose didn’t make it, neither did his brother.”

Camacho says he visited with Jose and his family a couple of times after that. But a few years later, he called Jose and found out that Jose had been in a car accident and died. Within the following year, Jose’s family moved. Camacho lost contact with them after that.

Allegedly in 2011, security officials of Yosemite National Park were hoping to catch a group of vandals that were damaging private property. They unexpectedly caught some mysterious creatures on camera instead.

These creatures look similar to the Fresno Nightcrawler. Except, this time, there are two of them, with one of them being a lot shorter than the other one.

Another sighting was reported in Poland, with no video or photo proof. The 2017 report is largely ignored by theorists.

Many have tried to explain what’s going on behind these videos.

The TV show Fact or Faked: Paranormal Files covered the Fresno sighting in 2010. The show follows a team of investigators who review unexplained photos or videos. If a piece of evidence is convincing enough to warrant further investigation, then they try to recreate it.

After traveling out to Fresno and doing some research, the team deemed the video legit. They couldn’t recreate it. However, the show has been criticized for poorly investigating videos on the show or even modifying footage.

Several Youtubers also attempted to recreate the Nightcrawler video too. They strung a wire between two points and threw a cloth puppet on it. They compressed the video to filter out the wire.

Some have claimed that the creatures are from Native American folklore. Allegedly, the creatures brought peace and happiness to humanity. However, this doesn’t seem likely because no tribes have claimed any connection to the Fresno Nightcrawler.

These types of videos are intriguing because we want to believe that something’s out there. And there probably is something out there. Does the Nightcrawler video offer proof? Not definitively. The quality of the original video makes that impossible.

But, the story has reached beyond the quiet farmland of Fresno. The Fresno Nightcrawler, with its iconic look, has inspired tons of amazing artists who share in the joy of these quirky creatures with a slew of merchandise, shirts, plushies, art, and more. After the hit video game Among Us raged across the internet, savvy gamers noticed a minor resemblance between the characters in the game to the infamous Fresno cryptid. It’s true the Among Us characters do share a few similarities, but they are just imposters much like the secondary Nightcrawler sightings in Yosemite.

While the secondary videos may be mere copycats or hoaxes, the original Nightcrawler footage continues to intrigue viewers. Victor Camacho sums it up succinctly, saying, “The Fresno Nightcrawler is an original case. This family lived something strange. I can’t explain it, but something happened that night.”

There haven’t been any sightings or reports recently. It seems like this story ends here, but the Nightcrawler will go on to haunt Fresno natives for a long, long time…

Adrian Gonzalez is a Los Angeles native who has heard his fair share of urban legends and crime stories. In his spare time, he loves to play games and write.