Dibbuk Box: The Story of a Possessed Wine Cabinet

Did Two Jewish Girls Unleash Something Evil and Seal it in the Dibbuk Box?

The term dibbuk, also spelled, dybbuk, comes from a Hebrew word meaning “cling.” In the Hebrew tradition, a dibbuk is a malicious spirit that is bound on the Earth to an object or person to complete unfinished business. The dibbuk box story that has taken the paranormal world by storm is about a small wine cabinet that was brought to America by a Polish Holocaust survivor named Havela. The history of the dibbuk box is a fascinating one that will take you from pre-WWII to the present. 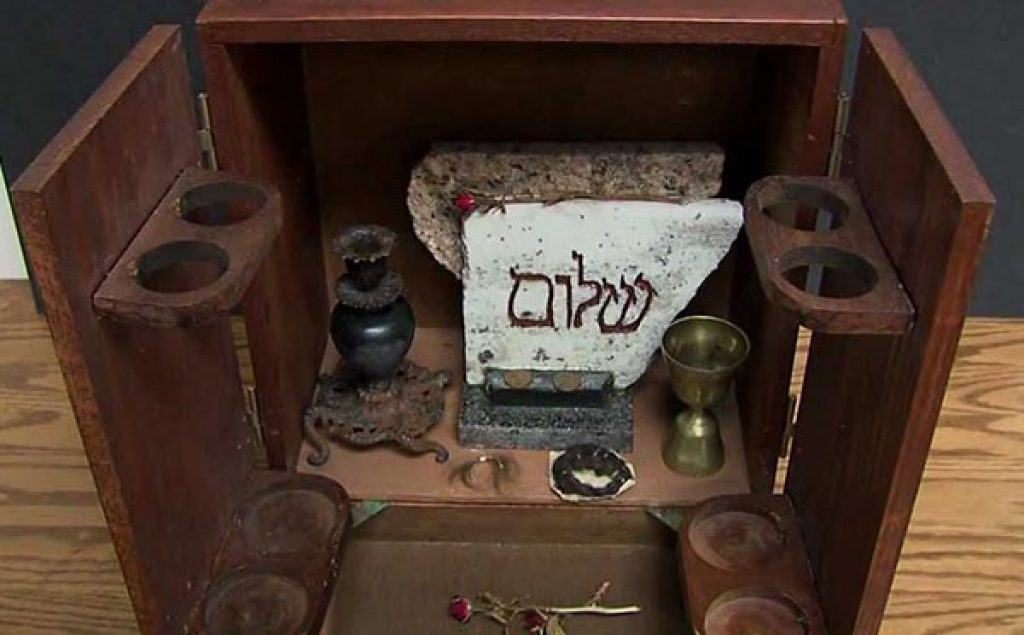 The contents of the open Dibbuk Box. eBay photo.

Havela acquired the box in Spain before her immigration to America. She kept the box hidden away safely in her sewing cabinet for the rest of her life. In 2003 after her death, Havela’s family held an estate sale where a man named Kevin Mannis purchased the box in a bundle of other items. He later spoke to Havela’s granddaughter to make sure that she had intended to sell it because he suspected it could be a special heirloom unintentionally placed for sale. He learned that Havela had owned the box since she was a young woman. Mannis offered to return the box, but the granddaughter insisted he takes it. She explained that it had sat in her grandmother’s sewing room, out of reach, and unopened for years because of the dibbuk inside it.

In a dibbuk box documentary, Kevin Mannis himself explained his experiences. He said that he owned an antique and furniture refinishing business in Portland, Oregon. He brought the box to his warehouse and put it in his workshop. About half an hour later, he received a call from his salesperson, who was screaming that someone was in the workshop, smashing things and cursing. She claimed that the intruder had locked all the gates and emergency exits, trapping her inside. When Mannis arrived, the doors were still locked, but there was no sign of an intruder. Upon entering, he found crushed light bulbs littering the ground and the smell of cat urine, even though there was never an animal inside. The salesperson was so frightened that she quit that day, after working with Mannis for two years.

When Mannis opened the box, he found two 1920s pennies, a lock of blonde hair bound by a chord, a lock of darker hair also bound by a chord, a small statue engraved with the word “Shalom,” a small golden wine goblet, a dried rosebud, and a four-legged candle holder. However, he did not realize at the time that there was something very strange about this seemingly harmless cabinet.

Mannis and His Family…And the Dibbuk

Although initially, he didn’t believe that the box had anything to do with the events that would follow, Mannis reports a series of horrific experiences while in possession of the cabinet. He had horrible nightmares, usually about a friend or loved one turning into a demonic beast and beating him, while the box was in his house. On October 28th, he gave it to his mother as a birthday present, and that same day she suffered a stroke. After the stroke, she scribbled on a piece of paper, “hate gift,” and rejected it.

He then gave it to his sister, who kept it for one week before returning it, saying that the doors of the box wouldn’t stay shut. After that, his brother took it, then returned it. He claimed that he smelled jasmine near the box, but his wife smelled cat urine. Mannis took it back, then his girlfriend asked him to sell it. He sold it to a middle-aged couple, but then found it on his doorstep a few days later, with a note saying, “This has a bad darkness.”

Desperate Decision to Sell the Cabinet

Mannis says that he wanted to destroy the cabinet, but he didn’t know what would happen. Thus, he decided to try to sell it. Here is an excerpt from his original eBay post:

I would destroy the thing in a second, except I really don’t have any understanding of what I may or may not be dealing with. I’m afraid that if I destroy the cabinet, whatever it is that seems to have come with the cabinet may just stay here with me. I have been told that there are people who shop on eBay that understand these kinds of things and specifically look for these kinds of items. If you are one of these people, please, please buy this cabinet and do whatever you do with a thing like this. Help me.

He later sold the cabinet on eBay, however, he relayed all the information about his experiences with it. Owners have reported a smell of cat urine or jasmine and other paranormal activity.

The last person to auction the box on eBay was Iosif Neitzke, a student at Truman State University in Missouri. He claims that the cabinet caused him and his roommates to suffer various health problems, light bulbs to break, a bug infestation, odd smells, and more. To make matters worse, his hair began to fall out. He went to a doctor and all his tests came back negative, so he attributed the hair loss to stress.

When he had had enough, Iosif sold the cabinet to Jason Haxton, the director of the Museum of Osteopathic Medicine. He thought of the mysterious box as a “historical puzzle.” He talked to a reporter, Leslie Gornstein, and said:

It came from somewhere. It was made for a reason. What is it and why is it?

After a short time, Haxton developed strange health problems, such as hives, coughing up blood, and “head-to-toe welts.” He soon decided to leave it in a storage unit. One night, the smoke alarm in the unit went off. When he went to see what was going on, he didn’t find any smoke. He was curious, so he brought the dibbuk box home and began researching it. On another evening he fell asleep near the computer.  But when he woke up he saw a shadow on the wall moving away from him.

Researching the History of the Dibbuk Box

After a while, Jason Haxton began wondering if something could be wrong with the story behind the Dibbuk box. He noticed several small details that could prove the history of it to be false. However, he needed to close these loopholes before he could write the book he was planning. For example, there were similarities between Mannis’s mother and Havela. Both ladies were Jewish and died at the age of 103. In his desire to investigate, he called Kevin Mannis to ask him more questions about how he came across the box. Then he asked for help to eliminate the dibbuk inside.

The questioning prompted Mannis to go back to the place where he bought the dibbuk box to see if he could get more answers. A long discussion with the granddaughter finally gave him the name Sophie, Havela’s cousin, who told him the story of how she and Havela trapped the dibbuk spirit inside the box.

Sophie indicated that between the two World Wars, séances were very popular. Sophie and Havela had made a spirit board and somehow came in contact with other-worldly beings. She suspected that the negative energy of the impending war probably attracted evil spirits. Havela and Sophie tried to bind the spirit they had summoned but failed. This happened on November 10th, 1938, the night of Kristallnacht. After the war, they tried to bind it again and were able to trap it inside the wine cabinet.

During their conversation, Sophie began apologizing, but Mannis was confused. He asked her why she was so upset, and she said that it was probable that the spirit they had summoned had been the cause of World War II.

Connection of the Dibbuk, the Eugenics movement, and Hitler

Even though they now understood the history of the wine cabinet, Jason Haxton grew curious as to what was influencing the strange events associated with the dibbuk box in the state of Missouri. After doing some research, he came across the name Harry Hamilton Laughlin. Harry Laughlin was famous for his role in the Eugenics movement, which inspired Hitler to create a super race. It was because of this movement that Hitler attempted to eliminate races that he considered inferior. 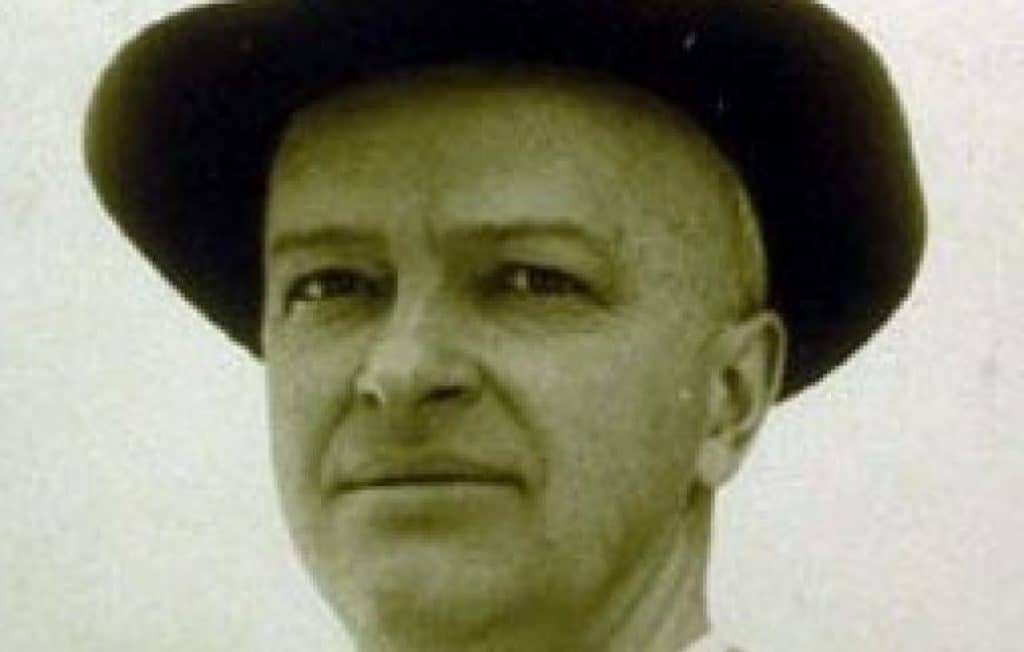 Coincidently, Laughlin attended the university that would later be called, “Truman State University,” the school that also Neitzke attended.

Haxton believes that the spirit possessing the box is on a mission to show them the truth about the Holocaust. He met with a psychic medium, who sensed death and fear surrounding the box. When she touched the box, she felt a stabbing pain in her left ribs and her head. She believed that those sensations had something to do with the original owner of the box.

Resealing the Dibbuk in the Box

Jason Haxton consulted various Rabbis about how to seal the dibbuk in the box. He secured it in an arc he constructed of acacia wood and gold, replicating the Arc of the Covenant, which contained the original 10 commandments. He then hid it in a secret location that he won’t reveal to anyone. 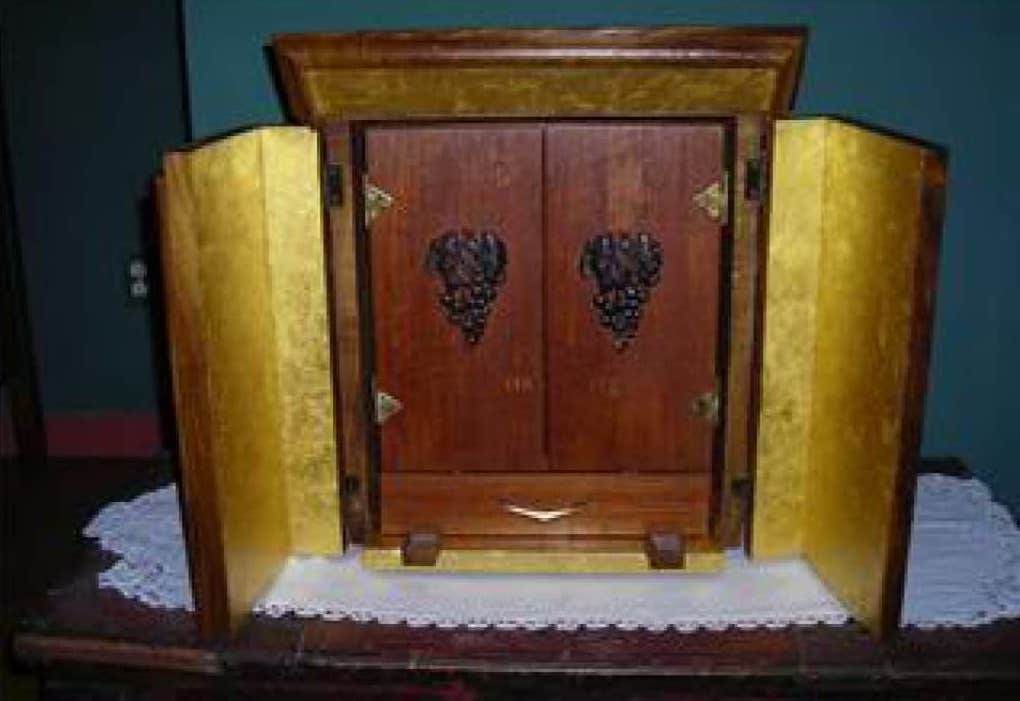 Psychologist Chris French, head of the Anomalistic Psychology Research Unit at Goldsmiths’ College, doesn’t believe in the authenticity of these events. He thinks that the reason these things happen is that the owners expect them to happen.

The owners are already primed to be looking out for bad stuff. If you believe you have been cursed, then inevitably, you explain the bad stuff that happens in terms of what you perceive to be the cause. Put it like this: I would be happy to own this object.

Nonetheless, the dibbuk box holds a fascinating story that involves not only the binding of a spirit. The story also binds the mad eugenic ideologies of two men, Laughlin and Hitler. The connection between these two men was the foundation of the entire Nazi movement. Sadly, it was also the rationale behind the killing of millions of people who would die in the most significant holocaust of all time. Maybe all thanks to the dibbuk box.

I grew up in a small town in Virginia and have always had a passion for reading and writing. My favorite genres are fantasy and mystery. I love reading about the supernatural and putting my own spin on it. I've always been told to write what I know, so most of what I write has to do with personal experiences, but I like experimenting with the unknown as well.