Did an entire village disappear from Lake Anjikuni?

Lake Anjikuni can be found deep in the Kivallig Region of rural Nunavut in Canada. Nestled along the Kazan River, it is a good spot for trout and pike fishing, both of which are plentiful in the area’s waters. Anjikuni quickly became the established home to an Inuit tribe that grew into a colony and became famous almost overnight on a cold November day in 1930.

Joe Labelle was a Canadian fur trapper, outdoorsman and was well acquainted with the area. He knew that the Inuit had formed a community in the region and visited them on occasions. Labelle was familiar with the Inuit tales of wood spirits that were allegedly malicious and that this remote part of Canada was also steeped in the legends of the Wendigo.

The Inuit tribe was friendly and would always welcome passing travelers and offer them a bed for the night. Labelle usually had very little cause to feel gripped by fear or anxiety, but this particular night at Lake Anjikuni proved different. The full moon that was overhead cast an eerie illumination across the village.

The huskies that were typically boisterous with the arrival of visitors were strangely quiet as well. The only sounds that Labelle could hear were his own snow-shoes and the hollow echo of his greeting. A frontier man such as Labelle would immediately understand that something was terribly amiss. He began to investigate upon entering the village.

The normal signs of life were completely absent. No laughter or the hubbub of conversation was detected. Even worse was the total lack of smoke emanating from chimneys that indicated the presence of life. Labelle noticed that a fire had been started off in the distance and made his way toward it. The fire itself looked as though it had been burning for a considerable time. On closer inspection, Labelle discovered that someone had begun the preparations for a meal but never finished.

The stew was ruined.

Labelle continued onwards further into the village, still hopeful of bumping into someone that may explain what had happened. Now rampant, Joe began to physically examine the homes of the tribe to determine if there was a hint or clue as to what might have caused them to up and leave. Unfortunately, no answers were forthcoming. Some of the discoveries he made were telling. Many homes were well-stocked with food and weapons. Labelle found another badly burned meal in one location, and in another, he found a discarded repair of a junior sealskin that had yet to be completed. Whatever happened must have been a sudden event that was widespread and affected all 30 men, women, and children in the village.

Labelle found no signs of a struggle but did find many items that a departing group would have required to bring with them. Food, arms, and clothing had all been abandoned.

The Dogs Starved To Death

Further investigations led to a pair of discoveries that chilled the blood of even this hardened veteran. As far as he was able to tell, whatever took place was a pretty recent occurrence. He had exhausted all fruitless efforts to find someone within the village. The bewildered trapper instead considered where they might have ended up going. Scanning the terrain in and around the village, he found no fresh tracks in the snow aside from his own. The most gruesome discovery he made was the reason for the absence of the dogs. Every single one of them had starved to death. This was more than enough to convince him to continue onwards to the closest telegraph office located several miles further. That did mean Labelle would have to ignore basic necessities such as food and shelter, but he was eager to leave the eerie village and retrieve help. 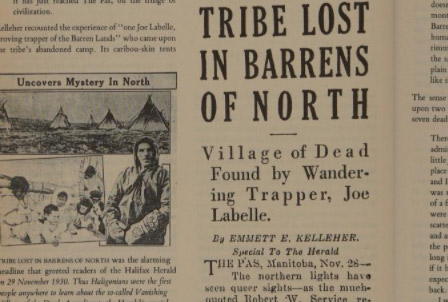 Once Labelle reached the telegraph office, he reported his encounter, and he insisted the Mounted Police (RCMP) launch an official investigation. En route to the village, the RCMP noticed an isolated shack that belonged to another trapper called Armand Laurent and his two sons. When questioned, they said they saw a large cylindrical object that transformed into a bullet shape before heading toward Lake Anjikuni . Unconfirmed reports also claimed that when the RCMP actually reached the village, they found that every grave in the burial ground had been opened and emptied. The headstones had been neatly stacked in piles on either side of the graves, ruling out animals as the culprits.

The RCMP conducted an intense and thorough investigation but could not produce one credible reason as to what had happened. What little leeway they made just led to even more questions that only served to deepen the mystery. Their conclusion was that the Inuit people had been missing for about 8 weeks before Labelle’s arrival. Using that as accurate, then how had the dogs managed to starve so quickly? There was time for burning food to be discovered, and the dogs themselves were a vital tool for the tribe as a whole. It seems inconceivable that they would intentionally cause harm or distress to the animals. And if they had been missing for two months, who lit the fire that Labelle found smoldering?

The story was reported by Emmett E. Kelleher in the fall of 1930 for the Danville Bee and reinvented in Frank Edwards’s 1959 book Stranger than Science. Since then, the RCMP states that it has no record of strange activity in the area. The RCMP has since dismissed this case as an urban legend.

The most review of this report was Dwight Whalen’s “Vanished Village Revisited,” published in 1976. After reaching out to the RCMP and other local authorities, he could find no corroboration of the Lake Angikuni story. Whalen concluded, “Thus, the case for the vanished village rest upon the story of an inexperienced trapper told to an imaginative and not too conscientious newsman.”

But given the limited evidence, this is one mass disappearance that will most likely never be solved.